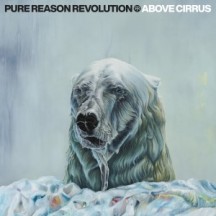 
With Eupnea dropping the month after most of the world entered lockdown, Pure Reason Revolution chose a hell of a time to make a comeback. Thankfully, that misfortune has by no means derailed their resurgent momentum.

Pure Reason Revolution had a brief but impactful run in the mid-to-late 2000s; The Dark Third is among the most essential prog rock albums of that decade, after which the group ventured into electronic waters for two records, with mixed results. The group then had a run of farewell shows in 2011 before going on hiatus for most of the decade. When they returned, it was presented as a duo comprising founding members Jon Courtney and Chloë Alper, but on Above Cirrus, that duo has grown to a trio; Greg Jong, another founding member that appeared on The Dark Third but had already left Pure Reason Revolution by the time the debut album was released, has come back into the fold. Rounded out with Geoff Dugmore again filling in as session drummer, this new-look PRR picks up where Eupnea left off.

One mild difference between Eupnea and Above Cirrus that Jong may or may not have influenced is a slightly heavier approach this time around, one that can be heard pretty early on. There were heavy rock songs and segments on Eupnea, most obviously “Ghosts & Typhoons”, but it wasn’t a dominant tone on the album. It’s still not on Above Cirrus, but “Our Prism” comes out of the blocks a lot harder and darker than one would expect from a Pure Reason Revolution album; if anything, the tom-heavy drums and sinisterly atmospheric lead guitar takes my mind to some of Tool’s heavier material, and from there it progresses into a loud, groovy alt-metal riff. PRR have never quite crossed over into metal, but “Our Prism” and “Phantoms”, another short track, take them close, as do impactful moments in longer cuts “Scream Sideways” and “Dead Butterfly”.

However, while these tracks rock hard and get the blood running, I ultimately listen to Pure Reason Revolution for lush, ethereal soundscapes and delicate vocal harmonizing between Courtney and Alper. Those harmonies do seep into those short, hard tracks, but “New Kind Of Evil” is the first chance on the album to float in the band’s warm, dreamy aura; the song does tease of an explosion of sound before pulling a fast one and slide into a neat, swinging groove for the touching chorus (only to immediately follow through on that promise with a big, brooding riff). “New Kind Of Evil” makes it very apparent early on that Alper, Courtney and Jong still know how to layer and coalesce guitars, keyboards and vocals to make mellow, heartfelt music in a way that only they can, while at the same time exploring darker, heavier sounds within the same tonal framework. The likes of “Cruel Deliverance” and “Lucid” further build upon this; the former in particular has an incredibly tender and moving chorus during which Alper and Courtney’s vocals dance around one another, whether with a delicate backing arrangement early on or a more voluminous cacophony at the end.

Pure Reason Revolution caused some division when they went in an increasingly electronic direction following The Dark Third; although they’ve returned to a heavier rock sound, those electronic inclinations remain healthy; amidst the rampaging riffing of “Phantoms”, one can find a full-blown synth bridge. Less front-and-centre, the subtle pulses that power along a driving rhythm beneath an airy lead guitar melody early in “Scream Sideways” elevated the track in a nuanced but meaningful manner. “Scream Sideways” is the longest song on Above Cirrus, and acts as something of a summary of everything PRR are capable; there’s “Bright Ambassadors Of Morning”-esque clean atmospherics, driving alt riffs, vocals ranging from dramatic to soothing, a nasty Tool-influenced bass groove, funk-Floyd detours and more, with the band jumping from one idea to another rapidly while somehow keeping everything feeling part of a singular whole (at least for the most part, there are moments where this sporadic approach becomes disjointed).

Eupnea set a very high bar for any subsequent post-hiatus Pure Reason Revolution that would follow. I don’t know if Above Cirrus quite manages to match it, purely because there’s nothing here that delivers the almost ecstatic beauty of that album’s title track, nor anything as irresistibly memorable as “New Obsession” from the same album. What we do get here, however, is an ambitious, creative and evocative record that further cements the reunion of this band as one of the most essential comebacks in the recent history of rock music.

Written on 04.05.2022 by
musclassia
Hey chief let's talk why not
More reviews by musclassia ››