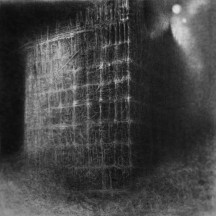 
Keep Qaalm and carry on.

Resilience & Despair is the debut record from Qaalm. I’ve seen Qaalm referred to as a supergroup by more than one article; I feel like I’m fairly on the ball in terms of metal, yet I haven’t heard of most of the bands that any of its members have been in, so I don't know whether ‘supergroup’ might be a bit excessive. One of its members, Henry Derek Elis, has actually already been in groups that justified that label, having performed vocals for Scar The Martyr (Joey Jordison, Jed Simon) and Act Of Defiance (Chris Broderick, Shawn Drover, Matt Bachand), but in Qaalm he is but one of three credited vocalists alongside Pete Majors and Brock Elmore. Anyone familiar with Derek Elis’ previous projects might be wondering if Qaalm is an alt-metal, metalcore, thrash metal or similar project. The answer is a strong no.

To give you a hint as to why not, I’ll tell you that Resilience & Despair is nearly 70 minutes long, but only contains 4 songs. With an average track length of 17 minutes, it’s unlikely to be particularly accessible. As it turns out, Qaalm play doom, doom of a relentlessly slow variety. It’s perhaps not quite funeral doom; there are moments with some sense of pace, as well as some lighter musical influences in the mix, as can be heard in the first minutes of the album. The atmospheric clean guitar that dominates the first few minutes of “Reflections Doubt” and sticks around as the track continues would have worked equally well as the basis of a gothic metal or post-metal track, as would the clean vocals on this track. I quite like the sung vocals on this album; there’s emotion and body to them. The extreme vocals, I have to say that I’m much less keen on them; there’s more than a few instances in which they sound a bit amateurish or lacking in weight.

70 minutes is an ambitious length for a first attempt at writing music as a band in a style that can easily walk the tightrope between ‘atmospheric’ and ‘boring’. “Reflections Doubt” gives early encouragement that Qaalm will be able to avoid collapsing into the latter category, riding each riff or lull just long enough to fend of feelings of staleness and incorporating some neat lead guitar solos and melodies as it imperiously trudges forth. In general, Qaalm have got a good feel on how to balance clean and distorted tones alongside each other in these glacial tracks, and manage to write riffs that retain their appeal with continued repetition. There’s also some more variety within tracks here than, say, Eremit feature in their songs.

Still, Resilience & Despair does perhaps overstay its welcome. “Existence Asunder” very much feels like a ‘bigger and better’ version of the “Reflections Doubt” template, right down to the guitar solo late on. By the time this prolonged classic-sounding solo is finished, Qaalm have slidden into a sumptuous sequence of riffs that move from melodic and rocky to nasty and grim, and you wonder how they will top it across the 35 minutes of glacial extreme doom that is still left. Ultimately, “Cosmic Descent” is pretty much more of the same, just more plodding and with a less attention-grabbing solo at the end. While “Lurking Death” re-introduces the clean vocals and makes the best use of Kakophonix’s cello, the song as a whole does drag during whole-album plays, at least until the drumming picks up the pace in the closing minutes.

It’s these thoughts that indicate to me where Qaalm could work on compositionally for their next releases; if those releases are going to remain so long, I feel some more variety in song structure would help. ‘Quiet intro-lots of trudging-melodic solo to finish’ loosely describes every song here; having the showstopping solo earlier than 10 minutes in once in a while wouldn’t be the worst thing, nor would playing around a bit more with the tempo across a 70-minute album. I also do feel that the harsh vocals are the area with the most room for improvement, particularly some of the lower growls, whether that comes down to the production or the performance.

However, these are all things that can be fixed without too much pain; at their core, Qaalm have found a sonic palette that nicely balances the thick, extreme doom riffing and the melancholic, atmospheric cleaner guitar, while spicing it up with unexpected yet effective solos. The strength of these components mean that even if Resilience & Despair has a bit too much content with a bit too little variety, it still makes for a compelling first outing from Qaalm.

Written on 05.05.2022 by
musclassia
Hey chief let's talk why not
More reviews by musclassia ››