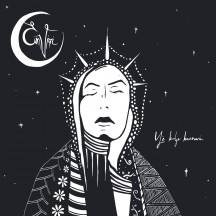 
Tired of waiting for a new Alcest album? Why not try Finnish Alcest?

Einvigi are a Finnish blackgaze band most well known for their classic Muistoja Toisesta Maailmasta and Kuun Vaa'at albums. The band’s Bandcamp page mentions that the founder, Petteri Granberg, “had a vision of mixing the themes of nature and Finnish folklore with the musical styles and atmospheres from metal to lighter rock music”. But one quick listen to Yö Kulje Kanssani reveals pretty quickly what the band is using as its foremost source of inspiration. Blackgaze definitely doesn’t hold as big of a share of metal’s market as it used to five years ago, so maybe I’m exaggerating the influence of the world’s biggest blackgaze band, but when even the drumming patterns remind you of Winterhalter, it’s a wee bit weird.

Now why in the world would I be reviewing an Alcest clone if I’m already complaining about having way too many records to review and such a blatant rip-off would generally be the first off my list? Well, for one, I love Alcest, and by extension, I loved this. And secondly, a lot of Einvigi’s moments that felt to go counter to their Alcest influence were what really made me even more invested in the band.

It’s quite telling of the band’s songwriting skills that they were able to make such a believable Alcest-core album. When that tremolo-picked guitar explosion in “Yö Kulje Kanssani” happened I knew I was instantly hooked. Though the production, especially how the drums sound in some of the blastier sections, does hold them back, this genuinely felt rewarding both as a substitute for and as an addendum to Alcest until there’s a new one from them.

But also there are some aspects of their sound that feel unique. For example, Alcest could’ve never made a song as post-punky as “Veresi”, and the closer replaces the Alcest vibes with Sólstafir ones. I guess it shows the “lighter rock” music side that’s a common influence to both bands, but Einvigi can be a bit versatile with it. The clean vocals are probably the most unique aspect, being a bit more in a Finnish folk/rock, while the harsh vocals are more meaty than usual for blackgaze. The bass is also a bit punchier. And though blackgaze is generally quite a melancholic genre, and you’d expect Finnish blackgaze to be exponentially even more melancholic, a lot of Yö Kulje Kanssani is quite bright and hopeful.

So despite being a bit too blatant in their main influence, I see how Einvigi could carve an even more impressive niche by acting even more upon those folk leanings. I assume the better production will come with a bigger budget, so I’ll not hold that against them. Please, when the follow-up drops, make me not have to namedrop Alcest every other sentence.

Written on 07.05.2022 by
RaduP
Doesn't matter that much to me if you agree with me, as long as you checked the album out.
More reviews by RaduP ››