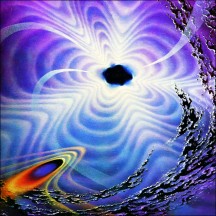 
01. Transcendental Visions
02. Be Here Now...
03. Inertia (Crashing Through The Doorways Of Eternity)
04. Traversing The Wandering Star
05. Ascending A Pillar Of Light


You can be astral and primal at the same time. Just ask those apes who found a monolith.

I first came across Astral Tomb with the Chasm Of Aeons split they did with Cryptic Shift, Replicant, and Inoculation, where they were the only band not to have released a full-length. They distinguished themselves from that bunch by being easily the nastiest, most lo-fi, and most violent of the bunch. Though it was clear they share some qualities with their fellow bands, in the sci-fi techy approach, only Astral Tomb sounded like “MÖNKE IN SPACE - The Movie”.

Their phormula could be described as a combination of elements taken from projects like Timeghoul and Blood Incantation but with the savagery and deconstructive nature of a band like Neoandertals and the psychedelic leanings of Sweven-era Morbus Chron. The riffing and gurgling growls are of the instant IQ-drop quality as I immediately lose my cool and go “urgh!” as the chugging riffs crush my eardrums. The drumming is very much in your face with a snare and kick drum abuse that disregards any sense of sophistication. But the more you focus on it the more impressive it becomes as you notice its jazzy vibe.

There is so much charm behind Astral Tomb's combination of brute force and intricacy. At one point they’re harmonic, at one point they’re abusing the fretboard. The production does wonders to enhance this clash of sounds as it is raw but very spacious and echoing, allowing the psychedelic touches to fully envelope the listener. Midway through the album there is a shift in tone with sci-fi synth ambience taking over. It is both trippy and unnerving as it mixes with the brutal death metal assault and throws the listener into a vortex filled with apes, stars, and… cosmic stuff. It’s good music, but taxing on my brain matter. Huh. I like it, though. Urgh.

I like when guitars go chug chug and the man goes urghhh. Sometimes guitar does wheeeeo wheeeo sound. Like laser pew pew but then woah sky, stars, very big objects. Makes feel like crush but then makes feel like fly. URGH ARGH UUUUURGH.