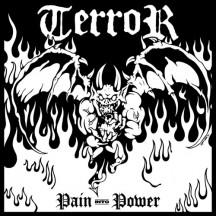 
Hold on for dear life.

If you are looking for a short, sharp shock type of record to blow the cobwebs away, then look no further than Pain From Power, the ninth full length (of original material) release by hardcore legends Terror (USA-LA). Unleashing their most intense and powerful record to date, it is one of those albums you press play on and hold onto the nearest object that is bolted to the floor, least you find yourself bouncing off the walls like a punk ping pong ball.

The return of Todd Jones (who had spent the years since his last stint in the band in Nails - take note of this, it plays a HUGE part on this album) to the fold and behind the production desk results in a record that sounds like a collaboration between Terror (USA-LA) and Nails. Hardcore songs infused with the power and intensity of grindcore: it is an insanely powerful and addictive mix.

At 18 minutes long, Pain Into Power should feel like an EP, but with the band tearing through the ten tracks with an energy of a Tasmanian devil on a methamphetamine binge, it feels like a full album played at triple speed. Though the runtime is short, you are unlikely to feel shortchanged by the amount of material presented here, hitting that sweet spot where the brevity works as part of its appeal, like a Reign In Blood or Scum. Given the album is only 18 minutes long, it is something that is best enjoyed in full, with the ebb and flow between solid iron groove and out-and-out power only shining in the context of all that surrounds it. Pain Into Power makes for an excellent palate cleanser or quick adrenaline hit, with its intensity shattering any concept of thought within your head and leaving you to mosh on the pieces.

Scott Vogel stretches himself as a vocalist, pushing his hardcore vocals to the limit to inflect maximum intensity beyond his usual limitations. On tracks like “The Hardest Truth”, you can almost feel his voice strain as he roars the lyrics out like a man possessed. While he challenges himself at pushing himself to his limits, it is not a natural place for his voice, leaving him limited beyond all-out assault; it works okay, but it does mean he sacrifices character for power. The rest of the band, however, take to this newfound approach like Glenn Benton takes to a hot branding iron, with Jett in particular speeding up his regular approach and the guitars buzzing like chainsaws such as on “Unashamed”.

The problem is that with all the songs being foot to the floor, amps to 11 powerhouses is that the intensity can cause the songs to blur together if there are not memorable hooks or moments. While this album does have some moments to punctuate the maelstrom, from George Corpsegrinder’s appearance on “Can’t Help But Hate” to the more traditional Terror (USA-LA)-sounding “One Thousand Lies”, there aren’t enough to really give this album a character of its own in the chaos. Though this is somewhat remedied by the fact the album flies by at a rate of speed, it does show the limitations to this runaway train approach to proceedings.

The time it has taken you to read this review is probably longer than half of the album (why are you waiting? Hit play already); Pain Into Power is well worth checking out if you are a fan of intense, stripped-down metal and metallic hardcore.

Written on 14.05.2022 by
omne metallum
Just because I don't care doesn't mean I'm not listening.
More reviews by omne metallum ››