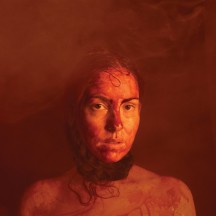 
01. Intro To The Underpool: The Path, The Gate, The Field, The Well
02. Keening Into Ffynnon Llanllawer
03. In The Cave Of The Cailleach's Death-Birth
04. Gathering Around Pair Dadeni
05. Brigid Wakes To Find Her Voice Anew. The Little Flowers And Birds Show Themselves
06. Imbolc Dawn Atop Ynys Wydryn. Ice Melts As The First Resplendent Rays Of Spring Pour Over The Horizon.
07. The Tempest On Trefasser
08. Don Danann Dana Danu Ana
09. Standing Stones Singing / Cellphone Towers Ringing Up To The Darkening Sky
10. In Sadness For Our Dying World (Here Come The Christians)


For the longest while, the thing that bugged me the most about Emma Ruth Rundle's discography was the fact that she had an album called "Electric Guitar 1", but no sequel to it. Well, that changed recently, but there's a reason it is called "EG2" rather than "Electric Guitar 2".

Yes, Dowsing Voice is a sequel to Emma Ruth Rundle's solo debut, 2011's Electric Guitar 1, in that it's also an album that's not the usual singer/songwriter folkish post-rock-ish dream pop-ish stuff that she usually does in her solo albums, which is weird to say since Electric Guitar 1 came out before those did, but at that point she had already been doing dream pop stuff with The Nocturnes and was starting out with Marriages. But as the first album under her name, it still feels quite alien and obscure, true to its name, it was just droning electric guitar soundscapes that showcased why Emma was such a capable guitar player in the soundscape sense, a sense that she then used to create music that's more song-structured. So I was pretty sure that, as obscure as that album would be, there wouldn't really be much of a chance for an "Electric Guitar 2".

Now that it is here though, EG2 is an even more bewildering record than its predecessor. Recorded in January 2020 in Wales, meaning that there's a pretty good chance that this was recorded before Engine Of Hell. As much as the two have in common in being intimate and stripped-down, and as much as both EG albums have in common as being mostly ambient albums, there's nothing that Emma has done that's even close. Mostly improvisational, mythical in vibe, guitars mostly acoustic rather than electric (which explains the need to not explicitly name this as "Electric Guitar 2"), but with the biggest focus being on the vocals, albeit everything vocal is lyrics-less. Self-described as "a weird art project", accompanied by an art book and an exhibition, you can tell that this one is marketed a bit more towards the "art crowd", hence why it's only streaming on Bandcamp, to the crowd that would most likely care about a sequel to "EG1". Hint: that's me.

You can tell by the song titles, that someone described as a mix between Godspeed You! Black Emperor song titles and Dark Souls NPC dialogue, that there's a quite cryptic and surreal sense to the atmospheres on Dowsing Voice. Other than a few droning moments in the opener and closer, the electric guitar is pretty much absent. There are some acoustic guitars to take its place, bringing this at least in a place similar to folk, albeit something that's more freak folk sprinkled with some John Fahey-like primitivism. For the most part, that's it instrumentally, though there are some ambient effects and reversing and reverb and the like. Everything else relies in the voice, which is about as much of an instrument here as the guitars. Singing, howling, whispering, barking, wailing, sighing, and everything human and inhuman, layered on top of itself, like a choir that represents voice detached from words and their meaning.

Is it good though? The experience of listening to this is so different from any other Emma Ruth Rundle album that I feel like the enjoyment I get from this is fundamentally different. There's plenty of beauty to be found here that lies within the same realm, and most of it stems from Emma's vocals and focus on soundscape, but the way they're used contrasts that beauty with a very ominous and uncanny feeling. In that regards, it definitely succeeds. Considering how much of this is improvisation, it does manage to sustain a mood while also providing some variety within it, even if I can't say that every bit works beyond how curious it sounds. It is a weird art project after all. It's pretty much meant to be more exploratory than accessible, and I know that if I were to try and say "regardless of its quality" it kinda sounds like me saying "so what if it sucks, it's not meant to be good", but the combination of bewilderment and enjoyment I got out of this is much more rewarding than most side-dish ambient explorations a lot of acts put up.

Now I just hope that there's gonna be an "EG3" which will leave me even more bewildered.

Written on 18.05.2022 by
RaduP
Doesn't matter that much to me if you agree with me, as long as you checked the album out.
More reviews by RaduP ››