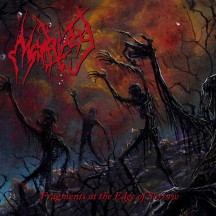 
01. Beneath The Emptiness
02. In The Amorphous Path
03. Ethereal Illusion Of Psyche
04. Fragments
05. Frayed Lunacy (Dying Sight)
06. Mindloss
07. The Accursed And The Throes
08. Edge
09. Astral Sphere From A Bleeding Soul
10. Process In A Secrecies Of Thoughts
11. Contaminated Echoes
12. Sorrow


Some bands nail the songwriting but struggle with the sound.

There is a lot to love about Mortify, which is why it’s frustrating to write this review. This is the TRUE Mortify, of course. There are literally a dozen of Mortifys that exist or have existed at some point. But out of the 12 I could find (including this one with Necromantia’s Magus, and this one with Wardruna’s Einar), only 3 have at least one full-length. And out of those 3, only 2 are still active and THIS Mortify is the only Mortify with two full-lengths. So these Chileans deserve the name. They should patent it. Or perhaps the name is cursed. Shit. Perhaps the name IS cursed because in between Mortify’s debut and Fragments At The Edge Of Sorrow, the band had to change all its members except for founder Cristian Fuentes.

This is really appealing to me already, as I’m always first in line for extreme metal from my home country. The intro with cosmic keyboards, cheesy narration and whispers is highly effective in setting the mood for old-school death metal, and once the opening track properly starts, it’s clear where Mortify’s strength lies: In their intricate riffs, song structures, and the impeccable melodies and solos that elevates them. Mortify take inspiration from bands like old Gorguts for their riffs. The riffing and pacing on Fragments At The Edge Of Sorrow is intense, slightly dissonant and ever-changing. Yet Mortify produces catchy tunes despite the very busy songwriting. To complement this brutal side of their music, Mortify puts emphasis on solos and melodies that heavily resemble what you’d hear on Human-era Death. The solos range from deranged and dark to even melodic and captivating. Even the bass gets love, adding another layer of complexity instead of just volume and following the riffs. Fragments At The Edge Of Sorrow is the type of death metal album that is as complex as it can get without necessarily being progressive. They focus on that incredible 90s period where death metal really tried to stretch the genre’s capabilities.

So what’s holding them back? Well, the elements that make this album stand out, like the solos, the catchiness and complexity of the songwriting, collide with one element. The drums. Well, not exactly. Alonso Villar is a great drummer who adds variation and intensity to this album. But man, what have they done with the production on the poor drums? When I hear bad production, it’s like everything sounds bad, but here it’s just the drums, as if the budget disappeared just when they were going to record them. At times they sound far away, at others too much in your face. The cymbals are half the problem. They sound weak and remind me of maracas. It really pulls me away from the immersion so carefully created by their songs. Mortify’s debut sounds even worse when it comes to the cymbals, so at least they are improving. Maybe they will nail it on the third try.

I still have a lot of faith in this project, as the songs themselves are fantastic. It could have been an excellent sophomore album, albeit a bit too long for its 50 minute runtime. But as it is now, Fragments At The Edge Of Sorrow feels a bit incomplete. Perhaps next time they will be able to acquire the production their songs truly deserve. Because once you get to that point, the final product truly shines.