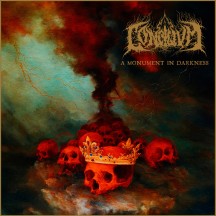 
Some bands don’t struggle. They nail both the sound and songwriting right away.

There is a lot to love about Concilivm, which is why it’s a delight to write this review. Concilivm is a duo hailing from Concepcion, southern Chile, who go under the minimalistic aliases “A” and “Ω”. Unlike “Ω”, who seems to be a mysterious figure, “A” is known to the public eye as Víctor Limarí. Mr Limarí has plenty of experience in underground acts, like the thrash metal band Vomit and the two black metal bands Dark Path and Hypnosinosis. What interests me the most though, is that Mr Limarí has been responsible for the recording, mixing and sound engineering for dozens of bands in the Chilean underground scene. He was even behind the knobs for Mortify’s debut album, a band I just recently reviewed. So naturally, the sound behind Concilivm’s debut is what I first wanted to focus on.

This is really appealing to me already, as I’m always first in line for extreme metal debuts that, despite lacking originality, already surpass many bands by the sheer magnitude and quality of their sound. There is no bullshit intro to A Monument In Darkness. Things get savage right away, not unlike Incantation at their prime. The crushing drums, violent riffing, ghostly howls, desperate whispers, and ritualistic vibe are highly effective in setting the mood for this riveting assault of blackened death metal (or deathened black? The balance is almost 50/50 on this one).

It’s clear where Concilivm’s strength lies: In their engaging songwriting, furious riffs and the impeccable melodies that elevate them. The production is sharp to give the riffs a crunchy old-school Swedish sound, but with an added warmth that goes well with the mid-tempo riffs, which are groovy enough to recall the mighty Bolt Thrower. Despite the harshness of the riffs, it is refreshing to get so many melodic leads in each song without the album reaching a melodic death metal status. The melodies soar loud and clear but there is always a hint of sinister madness behind them, like twinkling stars amidst a pitch black sky..

While there is nothing original about A Monument In Darkness, it is extremely well performed and the production takes Concilivm at least a decade above their contemporaries. At 38 minutes, they know full well how to not overstay their welcome and will leave you hungry for more.