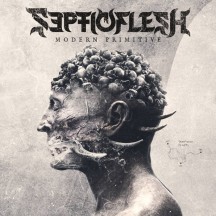 
Modern Primitive is a Septicflesh album; it’s no less than that, but it’s not really much more than that either.

Considering the extent to which Septic Flesh evolved prior to breaking up, it’s intriguing how consistent the band have been since reforming and rebranding as Septicflesh. Ever since 2011’s The Great Mass, Septicflesh have entered a holding pattern, such that anyone can predict what a new record will entail, from the morbid figure in the centre of the monochrome artwork to the bombastic symphonic death metal that comprises the musical core of each album. As much as Seth Siro Anton’s artworks consistently underwhelm, Septicflesh’s music has remained at the head of the symphonic death metal pack. Given the dearth of competition in that subgenre outside of Fleshgod Apocalypse, they’re not going to be dethroned any time soon either; however, Modern Primitive isn’t going to take them to another level.

If you’ve heard any of the band’s last few records, Modern Primitive is going to feel intensely familiar to you, and that comes with both benefits and drawbacks. On the plus side, Septicflesh still have an ability to write orchestrations that are rivalled by few within metal, particularly more extreme forms. The string arrangements add a lot of drama and urgency throughout the record, which at times is necessary, because Septicflesh are prone to writing plodding riffs every now and then. Both of the first two tracks on the record, “The Collector” and “Hierophant”, lack a bit in terms of excitement early on; both up the ante as they progress, and as their ends draw near, there is a palpable sense of urgency, but it takes some time to get there.

It's a shame that Modern Primitive struggles to gather momentum early on, as, at 39 minutes (the band’s shortest since their comeback record Communion), it doesn’t have too much time to waste. Thankfully, it does hit its stride after this, with the trio of “Self-Eater”, “Neuromancer” and “Coming Storm” serving as the peak of the record. In particular, “Neuromancer” has an infectious central motif that delivers passion in spades, and the album’s longest song has the time to extract the most out of this motif as it progresses. In terms of immediacy, “Coming Storm” has an aggression and urgency to it that stands out against most of the tracklist, and this high-octane chaos makes a strong impression during initial playthroughs.

Unfortunately, after this trio, the album slowly loses steam across the remainder of its runtime. It’s not an immediate drop-off, as “A Desert Throne” has some memorable main melodies, there’s some nice strings in the title track, and the trumpet blasts during key moments of closing song “A Dreadful Muse” ensure that Modern Primitive retains some excitement up until its end. However, after hitting double figures with the number of replays I’ve given this album, I was expecting the tail end of the record to eventually make more of an impression than it ultimately has.

If you enjoy hearing Septicflesh play Septicflesh in the manner that they have for what’s now over a decade, Modern Primitive should scratch that itch. However, those hoping for more might feel a bit short-changed, as, with the exception of a couple of standout tracks in the middle, this album feels like Septicflesh doing what they’ve already done without necessarily improving on it.

Written on 24.05.2022 by
musclassia
Hey chief let's talk why not
More reviews by musclassia ››