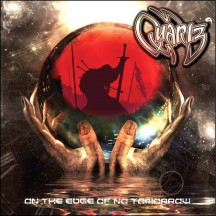 
This is it. Geoff Nicholls' last album.

For those of you who don't know, Geoff Nicholls comes from a line of long-serving keyboardists of bands that didn't start out with keyboards. The same category also includes Iron Maiden's Michael Kenney, and because of how overlooked they are, I'm pretty sure there are other examples that I just can't think of. Geoff Nicholls has served as Black Sabbath's keyboardist between since 1979 until as recently as 1998, gracing his keys to about a dozen albums and countless live performances. The fact that I even feel the need to tell you who Geoff Nicholls is despite being such a staple and long-serving member of the first metal band, the one band that Metal Archives think you have to know to register, is a testament to how overlooked his contributions are. And even more overlooked, is his work outside of Black Sabbath.

The most important of these is Quartz, a band that is sometimes credited as the first of the NWOBHM bands, a tag I don't necessarily agree with. I touched upon their 1977 debut in our Getting Into article for Black Sabbath, noticing how it's iffy to even call it heavy metal since it's more of a hard rock album, but there's still some heaviness that Quartz would explore on future releases. It's a bit condescending to spend so much of the Quartz discussion just to discuss one of their members, one that left the band after their debut and rejoined in the 2011 reunion, merely because of the connection they bring to a much more popular band. But since his passing away in 2017, it's pretty clear that his contributions to On The Edge Of No Tomorrow are the last we'll hear of his in such an extensive and new capacity. And also, if I had heard this album without the Black Sabbath connection, I would probably not feel very compelled to review it.

I respect Quartz for their place in metal history, and I definitely think their first two albums are very overlooked. I respect them for holding on to old members since their 2011, with none of the members being ones without any previous stint in the band, and for a band that broke up in the mid 80s, that's an achievement. What this leads to, however, is an album in an old sound by old people, who don't really have the self-editing or the production skills to make a metal album that would sit in 2022. I wouldn't mind if it would sound like an 80s album, and the problem isn't that it doesn't sound "modern" or "up with the times". The problem is that the album turns some decent songs with some decent riffs and lyrics into a very lame slog with very awkward production and performances, to create an album that really didn't need to be over an hour long.

Simply put, moments that gel together are far and in between. I'm not convinced how much of this is due to songwriting or production, but to Quartz' defense, I think it's more of the latter. I could definitely see most of these songs ending up pretty good if more care was put into them. I think the drumming is the worst offender, and I don't want to disrespect Malcolm Cope, who has been drumming for the band since 1977, because I understand how it would be pretty much impossible to drum like a youngster after more than four decades, but the awkward production does bring the very bare bones drumming even more attention to lessen the impact that the songs could've had. The best aspects of On The Edge Of No Tomorrow lies in the riffing and the vocal performances, the latter shared between (ex-)members David Garner and Geoff Bate, with some contributions by Tony Martin too. I'm also bringing the latter one up because some of the songs sound very similar to his stint in Black Sabbath, but also because he recently proved that ex-Black Sabbath members can still make fantastic heavy metal even in such a late age.

I don't like writing negative reviews for bands I respect, even though those seem to be the only negative reviews I seem to write. I hope Quartz had a lot of fun making this and I hope Nicholls' legacy will live on. I just hoped his final album would have gotten the care it needed.

Written on 25.05.2022 by
RaduP
Doesn't matter that much to me if you agree with me, as long as you checked the album out.
More reviews by RaduP ››