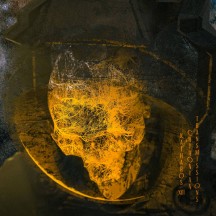 
With only 10 days between albums from Katharos and Katharos XIII, it’s a shame that we didn’t get daily releases from Katharos II-XII, but they wouldn’t be as good as Chthonian Transmissions anyway, so I can live without.

Katharos’ Of Lineages Long Forgotten was a pretty respectable, if somewhat rudimentary, symphonic black metal release. Katharos XIII’s previous album, Palindrome, was anything but rudimentary; a subtle undercurrent of black metal lingered beneath an insidious concoction of mellow jazz and dark ambient. I was very much won over by Palindrome, although I could hear room for improvement with the metal parts, which has a roughness and crudeness at times that betrayed the atmosphere created across the rest of the record. In my review of that record, I felt that Katharos XIII could really be onto something if they refined the metal portion of their sound, and Chthonian Transmissions very much backs that sentiment up.

It should be mentioned that, despite highlighting that dark ambient/jazz core of Palindrome as such an appealing element, it’s not been entirely carried over to Chthonian Transmissions; there is enough of that jazz to be heard here, for sure, but this feels like a more metal-oriented record. The good thing about that is that the metal is much better executed this time around, with the production also helping it come through more favourably than it did on Palindrome. The combination of the doomy blackened metal and the sinister lounge on opening track “Neurastenia”, with Manuela Marchis-Blînda’s vocals and Alexandru Iovan’s saxophone working nicely in combination with both the metallic and the more ambient portions, showcases Katharos XIII as an explorative band, but one with a firm grasp on what they’re aiming to create. There’s also a nice bridge of tribal ambient percussion midway through the track that only builds further on what the band have already created in the first half of “Neurastenia”.

I finish quite a few of my reviews with something along the lines of ‘if band X could improve element Y, they could make a killer next record’, but Chthonian Transmissions might be the first time I’ve had a statement such as that vindicated. If I was to be ultra-picky, I wouldn’t mind a bit more of the jazzy side, which feels slightly less prominent here compared with on Palindrome, but that’s a very minor personal preference; I’m delighted to hear Katharos XIII really starting to fully unlock their true potential with this album.

Written on 25.05.2022 by
musclassia
Hey chief let's talk why not
More reviews by musclassia ››