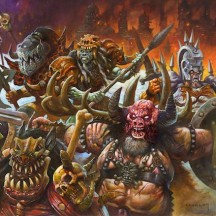 
The band that needs no introduction.

How do you even review a band such as Gwar? Certainly not with a straight face for a start; they’re one of those bands you just seem to know even if you’ve never given them a proper listen before. Having made it fifteen albums into their career, the Scumdogs are back and again taking no prisoners with their OTT metal on The New Dark Ages.

Ostensibly a concept album, The New Dark Ages finds that fine line between narrative and entertainment for the most part (a poignant piece about the fragility of man’s ego and the inner conflict of the human soul... nah, it’s about a “Duoverse”), with proceedings not getting bogged down in carrying a story over just being a fun collection of songs. While this isn’t always the case here (“Unto The Breach” and “The Beast Will Eat Itself” just slam the brakes on the momentum the album builds up to those points), you can rest assured that this isn’t an audiobook with some guitars placed on the sides.

So far so good then, musically; the band are back at their thrash-adjacent selves for the most part, with songs like “Berserker Mode” and “The Cutter” being prime examples that the band can throw down when they want to and are written off at your own risk. While the band certainly don’t find themselves confined by genre, they don’t venture too far from this core sound on the album, dabbling with hardcore on the blistering “Mother Fucking Liar” and the alt-thrash “Starving Gods”, though it is “Ratcatcher”, with its rock and roll vibe, that shows that the band can push their boundaries (weird as it to say that a band like Gwar have any kind of boundaries) and do it well when they want to.

The band are able to do all this because they are a solid metal band first and foremost, with Balsac and Pustulus Maximus (come on Rock and Rock Hall of Fame, induct them please) being overlooked guitar players; “The Cutter” features an addictive groovy riff, and “Rise Again” a great solo (in an otherwise so-so track). Jizmak Da Gusha (think I went to school with him) does a solid job holding down proceedings on drums, though I’m not a fan of his snare drum sound. Even though this is Blothar’s second outing as the band’s vocalist, his more melodic approach still feels like an odd fit for the band; though I can appreciate that they didn’t want an identiclone for Dave Brockie, it still feels odd for Gwar, though tracks like “Bored To Death” show he isn’t bad.

With that said, The New Dark Ages never really pushes itself beyond being just good consistently enough; sure, it is a fun listen and one that I found myself giving far more time than I expected to, but while it certainly has its charm and character of its own, it isn’t matched with enough consistent quality. The aforementioned “Unto The Breach” and “The Beast Will Eat Itself” do have the effect of breaking the immersion the album is able to lull listeners into, meaning the The New Dark Ages has to pick up and start from square one again.

Chances are, you will likely give this album a go solely because it's Gwar anyway, but as a distinct piece of work on its own merits, The New Dark Ages is a good slab of metal, a fun and heavy way to spend your time and bang your head. The scumdogs ride again once more.

Written on 31.05.2022 by
omne metallum
Just because I don't care doesn't mean I'm not listening.
More reviews by omne metallum ››