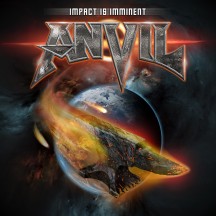 
Anvil are now over 40 years old, and have seemingly barely changed over that time, which may not be for the better.

I discovered Canada’s Anvil, like many of you potentially did, through the Anvil! The Story Of Anvil documentary. The Spinal Tap-esque documentary, which focused on the band’s struggles in the face of declining popularity, brought them a new wave of popularity, and shone a light on albums such as Metal On Metal. The Story Of Anvil highlighted how Anvil were co-headlining festivals alongside the likes of Scorpions and Whitesnake in the early 1980s, and lamented their comparative lack of success afterwards; however, I imagine I wasn’t the only one to listen to Metal On Metal and hazard a guess as to why they hadn’t become legendary, and those reasons carry on through to the present day.

Impact Is Imminent is the band’s 19th full-length record, and follows in the vein of the last 18 by having a three-word title where the first and last words begin with the same letter (bonus points here, as the middle word does as well), as well as having an anvil on the album artwork. This consistency carries over to the music as well, which is unsurprising, as the core of Anvil (guitarist/vocalist Steve “Lips” Kudrow and drummer Robb Reiner) remains unchanged from their formative line-up. You get heavy metal on Impact Is Imminent, and you get it played in a fairly accomplished manner; Lips is a skillful guitarist, throwing out enjoyable solos and decent riffs across the 14 tracks that make up the record. There’s always been a speed metal edge to Anvil, and up-tempo cuts such as “Ghost Shadow” and “Bad Side Of Town” show that side of Anvil to be alive and well.

Still, as much as Kudrow elevates songs as a guitarist, he hinders them as a vocalist. For a guy who has ‘Lips’ in his name, he’s never been the most accomplished vocalist, even in the Metal On Metal days, but there was an exuberance of youth that somewhat compensated for these deficiencies back in the day. Nearly twenty albums in, and that exuberance is no longer, leaving behind that awkward enunciation and wayward pitch to shine in their infamy. For a lot of Impact Is Imminent, how much one can enjoy a song depends a lot on how much Lips sticks to what he can do. Opener “Take A Lesson” sees him playing it safe with a simple but fitting performance to go with the arena aspirations of the big-sounding chorus and shredding solo. “Wizard’s Wand”, on the other hand, sees an already tedious composition sunk further by painful singing and banal lyrics.

When listening to Kudrow’s vocals, one can envisage why Anvil didn’t perhaps become an A-tier metal band. However, nobody’s going to be surprised when listening to an Anvil song that the singing isn’t of the highest quality, and it’s not going to dissuade long-term fans of the band. Whether Impact Is Imminent is considered a success will come down to the quality of the tracks instrumentally, and on that front, it’s very much a mixed bag. On top of “Take A Lesson”, “Ghost Shadow” is a mini-juggernaut of a track, “Fire Rain” has some slick 80s hard rock cool to it, “Someone To Hate” features some solid licks and riffs, and “Teabag” is a fun little bluesy instrumental jam. On the flip side, “Wizard’s Wand” is joined in the scrap heap by the plodding “Another Gun Fight” and the misleadingly unexplosive “Explosive Energy”, while “Shockwave” manages to inspire anxiety with the sound of its chorus cowbell by the time its painfully long 5 minutes are over. With a trumpet-infused repeat of “Teabag” in the form of “Gomez” closing out Impact Is Imminent with a dud of a conclusion, Anvil have treated their diehards to an inconsistent experience.

Anvil’s latest record is devoid of novelty, beset by bad singing, and laden with several tracks that could easily have been left on the cutting room floor without anyone missing them. However, I doubt there was anyone entering Impact Is Imminent expecting anything else, and those that were excited by the prospect of this record anyway will probably be mostly satisfied.

Written on 26.05.2022 by
musclassia
Hey chief let's talk why not
More reviews by musclassia ››