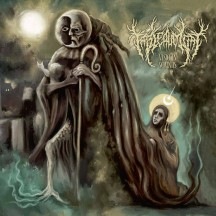 
As the Church of Batushka underwent many a schism, other robed black metal bands emerged to fill the void, with some of them offering a more twisted take on the Orthodox black metal concept.

Tableau Mort are a London-based black metal band, albeit one predominantly comprised of Romanian musicians (they were initially formed entirely by Romanians, during which time Daniel Neagoe, Romania’s busiest man, briefly fronted the group). As alluded to in the first line, their stage image draws a lot from Eastern Orthodoxy, while their metal is black and harsh. I've had the pleasure of witnessing the spectacle of their live shows; however, since the non-Brits among you may not be able to so easily experience one of their gigs, I’ll just have to convince you why their studio material is similarly worthy of your attention.

The band’s debut album, 2019’s Veil Of Stigma. Book I: Mark Of Delusion, had hints of those Orthodox influences in the music, primarily in the form of background choirs, but without having seen the band, those elements may not have been entirely obvious; first and foremost, Tableau Mort were (and are) a black metal band, and a blast-heavy one at that. On Visio In Somniis, those Orthodox elements are perhaps even less obvious in the music, with less of the backing choir sounds to be found and keyboards mostly used to set the scene at the beginning of songs. However, while these concepts may have taken more of a backing role, there has been obvious progression musically in other ways on the part of Tableau Mort.

My favourite track on Veil Of Stigma. Book I: Mark Of Delusion was the opening song, “Impending Corruption”, a relentless attack of hooky tremolo riffs; I’m also most drawn towards the opening track of Visio In Somniis, but actually for very different reasons. “Metamorphosis” is a lot more multi-faceted than “Impending Corruption”; there are sinister, doomy black metal riffs and bursts of blasts, but also some almost blackgaze-y shimmering guitar tremolos that drift in and out of the track, overlapping with and bleeding into the keyboard accompaniments. In addition, the guitars show off in a different way later on, with a surprisingly melodic and classic metal-inspired sequence of guitar soloing; I don’t know if guitar solos are a new addition on Visio In Somniis, but they’re at least a lot more noticeable on this record, and they make a really positive contribution to the album. These melodic aspects to “Metamorphosis” clash nicely with the grimmer, darker parts of the song and emphasize the range that Tableau Mort have in their locker.

That darkness takes on a more dominant role on several later tracks, as Visio In Somniis feels like a far more dissonant record than its predecessor, but frequently there is still a yin to that yang; as doomy, bleak, harsh and dissonant as “Idolatry” can be for large portions, there is contrast to be found with more soloing, as well as the first cameo of choral sounds. Those choral sounds are few and far between, but there is still some diversity in vocals across Visio In Somniis; on top of the strong return of James Andrews/Johnson (I’ve seen both surnames used in different promotional posts) and his pained blackened shrieks to the group after a couple of years apart, there’s also effective use of a couple of guests. The title track detours away from a frenetic opening through to a slow, semi-ambient bridge, during with Janina Kiessling’s distant-sounding croons float in the mix to add an ethereal darkness, while closing track “Candle In The Darkness” seeks a more dramatic flair courtesy of Laura Delogu’s operatics.

Although I’m really impressed by how Tableau Mort have developed with their second album, there are perhaps still aspects that aren’t quite yet perfect. Considering the album manages to make a strong initial impression with the first three songs, I do find that it struggles a tad to keep my attention during the following streak of tracks before “Candle In The Darkness”; while the dissonant chaos that is conjured on the likes of “Blood Echoes” and “The Fire, The Star” is impressive, it comes at the expense of some memorability, without quite the same irresistible ‘force of nature’ pull of the finest dissonant black metal bands. Still, “Candle In The Darkness” does a good job of recovering that sense of lost momentum, offering memorable moments throughout and exploiting the choirs and operatics to very good effect, ensuring that Visio In Somniis finishes on a strong note.

Written on 01.06.2022 by
musclassia
Hey chief let's talk why not
More reviews by musclassia ››