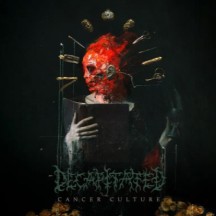 Has there been a band in metal that has had to endure as much as Decapitated have had to during the course of their career? With the band seemingly pinballing their way through a series of controversies and tragedies, it’s hard to believe the band can maintain any kind of momentum and success, let alone at the level that they have reached. Returning with their first studio serving since 2017’s Anticult, the band continue to make strides forwards musically, even if they may end up taking another step back sooner or later. As a humble music reviewer (says “Omne”), the music is first and foremost my area of attention, so I won’t delve into other issues beyond that, which would require me to be a judge and jury (though I’m awaiting Metal Storm to award me a license to kill, I hear it's in the post as I type) and doesn’t pertain to the music.

Cancer Culture is very much a case of 'don’t judge a book by its cover', for although the artwork is about as appealing as undergoing the act of decapitation to show your love for the band (I’m such a big fan I’ve had it done five times already), the music contained within is much better than what you may have expected if the cover art was any indicator to go by. With raging bulls of tracks in “No Cure”, “Just A Cigarette”, “Last Supper” and “Hello Death”, there is a good dose of metal to be found contained within.

Vogg’s guitar work remains the centerpiece around which the rest of the band work, with his riffs central to tracks like “Last Supper” and “No Cure”; however, the rest of the band fight for your attention throughout as well. Newcomer Stewart gives Vogg a run for his money, with his energetic yet equally hypnotic drumming being something that will likely make you return to some tracks solely to focus on what he is doing (see “Suicidal Space Programme”).

While the guest appearance of Jinjer’s Tatiana Shmayluk is the expected solid result you would assume it to be, the appearance of Robb Flynn is likely to be a moment that keeps listeners in a state of apprehension, with Flynn’s current ability to have the Midas touch in reverse likely to mean you keep your finger over the skip button in anticipation. However, while “Iconoclast” isn’t a great track, it certainly isn’t the exercise in pressing the skip button you would assume it to be.

Cancer Culture, however, does have its flaws it must be said. First and foremost, I am likely to be far more receptive to the album’s style given I heard the band’s post-reformation material first and worked my way back, so for those of you who prefer the band’s original sound will find your mileage will certainly vary. Perhaps the most glaring flaw, however, is that the album is a lot less consistent than their recent output; the title track and “Suicidal Space Programme” are formulaic to a fault, sounding like the band combining generic parts together to create relatively uninspiring tracks (drums aside). Meanwhile, “Hours As Battlegrounds” has to rank among some of the band’s worst work, with it building an atmosphere to a song that never appears, leaving little in the way of replay value (and this issue is compounded by it following the short, sharp shock that is “Locked”).

While following up Anticult was always going to be a hard task for the band, Cancer Culture is a good, though ultimately unsuccessful, attempt at doing so. Decapitated continue to produce several songs that will keeps fans happy and working out how on earth they manage to produce the sound that they do; they are, however, unable to do this in the quantity required to pack an album full with strong songs, rather than just songs with potential.

Written on 04.06.2022 by
omne metallum
Just because I don't care doesn't mean I'm not listening.
More reviews by omne metallum ››