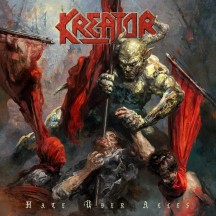 
Sergio Corbucci is dead, but Kreator are still very much alive. Seriously, I have no idea what that intro track is all about as I have no idea why bands use irrelevant intro tracks that offer nothing to the general album experience, but let’s not dwell on that. There is a new Kreator album coming out and, in a nutshell, it is more aggressive, more melodic, and more… experimental. You didn’t quite expect that. Or did you?

Don’t get too excited, though; Hate Über Alles still kind of begins where Gods Of Violence ended, and you didn’t have to be a fortune-teller to predict that. The band’s choices for the first two singles were so similar for both albums that the direction of the latest one could not have been misinterpreted; a fast-paced, metal thrashing mad title track with a fist-pumping chorus was used as introduction, followed by a stadium-filling banger (“Strongest Of The Strong”) that is destined to set live stages on fire. However, and just as you were prepared to say “same ol’ sound, same ol’ recipe” the band threw a curveball with “Midnight Sun”, their first ever collaboration with a female artist. And it worked like a charm, as far as I am concerned. By the way, Sofia Portanet is a musician worthy of your time and I strongly suggest that you try out her own stuff.

Back to Hate Über Alles; so, this album is the most experimental Kreator have been since the ‘90s. In no way do I mean that the Germans have taken a U-turn, but I also don’t think I have heard that much use of clean vocals in any post-2000 album. This is not necessarily a bad thing; in all fairness, I did secretly hope that Kreator would spice things up a little.

And there is plenty to enjoy on this one. It starts really strong, and I love how the title track gives way to “Killer Of Jesus”; the transition is seamless and makes for a relentless assault. “Strongest Of The Strong” is one of their most addictive tracks of recent years. “Conquer And Destroy” has a furious thrashy verse and a deliciously melodic chorus; it is one of my favourites, along with “Pride Comes Before The Fall”, which is catchy as hell from start to finish. There is this very familiar pattern for the tracks with faster and more aggressive riffs to slow down in order to make space for an anthemic chorus to sing along to. It works really well much more often than not, but I have to say that every time I play the album and “Demonic Future” shows up, I feel somewhat tired by this repetition in the songwriting.

Which brings me to my other gripes; “Crush The Tyrants” is very heavy, but it has this chugging, generic riff that is a bit too simple to stand out. “Become Immortal” is more or less a traditional heavy metal track, which has a good verse but a largely uneventful chorus and an even more derivative bridge. The closer, “Dying Planet”, was co-written by Mille and new bassist Frédéric Leclercq (ex-DragonForce, Sinsaenum), and it could have been an interesting doomy exploration. Unfortunately, it doesn’t stay appealing for its entire seven minutes of runtime, but I’d still like to see what this collaboration could bring in the future.

The sound, courtesy of producer Arthur Rizk, is pretty big in a Nuclear Blast-y kind of way. Some could argue that it suits the music, but I am not a fan of this type of production. On the other hand, the cover art by Eliran Kantor is a feast for the eyes and it looks like a fresh take on the cover of Pleasure To Kill.

Overall, the positives far outweigh the negatives, in my opinion, and I expect Hate Über Alles to be received fairly warmly by fans of the band’s later releases, albeit with a little less enthusiasm. I don’t think anyone expects another Pleasure To Kill, Extreme Aggression, or Coma Of Souls from Kreator any more. I know I don’t. The Germans have been making similar thrash music since 2001, while adding loads of heavy (anyone said Iron Maiden?) and power metal ingredients in their sound along the way, especially after Hordes Of Chaos, and they have undoubtedly become more commercial. I personally don’t mind that in the slightest. In fact, I mostly enjoy this direction. Each new release from these guys appeals to my inner adolescent so much that they could go on making that same album for another twenty years and I will still be banging my head to it in my sixties. But that is my own [very] subjective opinion. Listen to the album and share yours in the comments section.

“Strongest of the strong
Curse their world, curse them all
We will rise, they will fall”