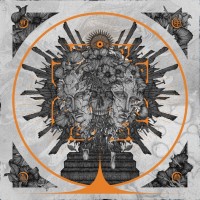 
Shrine on you crazy diamonds.

Having won me over with their last album, I had high expectations for Bleed From Within’s eventual follow-up record, which has come in the form of Shrine. While the album has a level of charm and enjoyment, it is one that does fall short of the bar the band had set for themselves previously, coming up short but with admirable effort at least.

Shrine seems purpose-built solely for giving the band arena-ready anthems that will get audiences moving and singing along during live shows (can you believe they’re a thing again?). Aiming for anthemic metalcore, Shrine emphasises the groove and grandiosity of the songs, chiselling down the tracks to ensure they are lean and to the point. The resulting songs are catchy and memorable within a few listens, with choruses that will likely have you humming along, such as on “Invisible Enemy” and “Levitate”.

The album is a mostly mid-paced affair, though as Richardson on “Flesh And Stone” shows, this needn’t mean the album lacks for power. “Stand Down” sticks out solely for its driving rhythm and propulsive drums; it is a highlight of proceedings. Kennedy’s vocals have a power and charm to them initially, but by the time “Shapeshifter” rolls around, he begins to feel like a 2D singer in a 3D world. The guitar tandem of Gowan and Jones don’t manage to craft as many memorable riffs or solos this time around, leaving you devoid of that one killer hook or riff that could draw you in and elevate a song.

The flipside of the band’s decision to whittle the songs down to make them more digestible and streamlined is that they’re boiled down to the bones of what makes a good song, depriving them of the little frills and additions that give the songs character and identity, seeing the band push their brand of metalcore through the cookie cutter process of the de jure pre-dominant sound of the moment a la Parkway Drive. The use of orchestration does minimize this issue somewhat on tracks like “Levitate” and “I Am Damnation”, giving the songs a level of variation, but it isn’t enough to offset that undercurrent that the band had dived into the sea of metalcore bands and lost their identity beyond a vague image distorted beneath the surface.

The biggest shortcoming with Shrine however, is that while the band clearly aim for arena-ready anthems, the song quality isn’t quite there yet, leaving them feeling like the opening act of an arena bill than the headliner that they are surely aiming to be. Tracks like “I Am Damnation” and “Sovereign” are good, but not the huge anthems they were clearly designed to be. Sure, they will likely be features of setlists for years to come, but they are unlikely to be the moments that concerts are built around.

While Shrine doesn’t live up to the expectations I had for it, it isn’t a bad record overall; it has its moments scattered around and a good level of song quality throughout. It just lacks those big moments that define an album, leaving the record with a lot of hype but no explosive payoff. Bleed From Within will likely be a name cropping up regularly for years to come, hopefully this is just the calm before the eventual storm.

Written on 14.06.2022 by
omne metallum
Just because I don't care doesn't mean I'm not listening.
More reviews by omne metallum ››