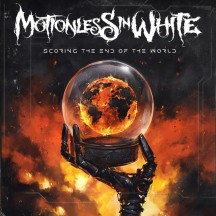 I know what you’re thinking, Omne you crazy fool, are you a glutton for punishment? Volunteering yourself to listen to a Motionless In White album in 2022? Ah, well there is a reason for my madness (just ask my doctor), but mostly, it was because back when I was a wee lad delving deeper into my journey into metal, I became a big fan of The Defiled, who, in a Venn diagram of music, have a lot in common with Motionless In White. Wanting to hear what modern industrial gothic metalcore (just rolls off the tongue) sounds like nowadays, I decided to give Scoring The End Of The World an appraisal and see if the style still holds up today.

That, perhaps, is the biggest caveat here; I am listening to this as someone who long passed through their gateway phase and has delved deep into the deepest, darkest niches to find new sounds and styles that populate the metal landscape. If you’re someone who has yet to fall deeper into the world of metal, then your experience of this record will undoubtedly be a lot more positive than mine was. Perhaps it's because I am already neck deep in metal, having dived into the deep end of the genre years ago and the introductory gateway that all metalheads walk through when they begin their journey is faraway in the distance when I look back (ah, such heedy innocent days), but much of the material here sounds like the modern spin on an old recipe. True, that’s what modern music is, but there is little spark or twist to make tracks like “Masterpiece” or “Burned At Both Ends II” stand out and want to grab your attention, while songs like “Cyberhex” just pass by with nary to remember.

The biggest problem is that there is little here that makes you want to scream out and sing along with it; “Werewolf” seems built for those big moments during one of the band’s shows, but the chorus doesn’t pop like you would expect it to, leaving you with a bland piece of white bread where the cherry on top should sit. “Red, White & Boom” does fit this mould well and gives you a song to bop and sing along to, but it doesn’t sound unique, and feels like something you will have heard plenty of times before: not bad, but not something that has you losing yourself in the music either.

I will hand it to the band; between Motionless’ lead vocals and the backing vocals from Sola and Olsen, Motionless In White have well-sung tracks such as “Cause Of Death” and “Porcelain”. While the musicianship may be generic and unadventerous, there are flourishes here and there that do give the band that extra level of identity that stops them falling into the trap of becoming another identikit modern metalcore band. The little keyboard and synth parts scattered across songs like “We Become The Night” and “B.F.B.T.G.: Corpse Nation” do add to the songs and ensure the band don’t sound like another Wage War.

What did catch me off guard was that between the songs that sound like Addams family-level horror, was that the band would tackle some deeper topics every so often, with opener “Meltdown” starting off on a global warming theme before “We Become The Night” does address the state of the modern world. Yes, they do sound like the generic soft protest song, but they did show me the band are more than just a schtick horror gimmick band.

This album did confirm to me one thing, namely that I have become what every one time fears: I have gone from the fun-loving type to the cynical and grouchy Statler and Waldorf adult. While Motionless In White were unlikely to be my cup of tea, I didn’t find myself finding a soft spot to them thanks to their similarities to The Defiled. Scoring The End Of The World is unlikely to hit the spot of anyone searching for nostalgia, but will likely go down well for those starting their journey into the genre of metal and well; while I may not enjoy it, hopefully there will be some that do, who later delve deeper into the genre overall and there is another metalhead in the world.