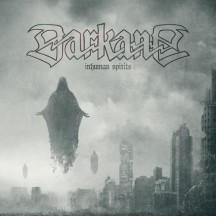 Darkane are one of those bands that always seem to exist on the periphery; you know who they are, but never quite give them the attention that they arguably warrant after producing records like Rusted Angels and Expanding Senses. Well, after a nine-year(?!) absence, the band are back with their seventh record Inhuman Spirits, once again raising the question: what genre are Darkane really?

Continuing to sit on the edges of the Gothenburg sound and thrash, Darkane offer a compelling combination of both that results in a versatile sound that bounces from a wall of sound approach to a guitar lead assault. “Conspiracies Of The Flesh” and “Inhaling Mental Chaos” have an addictive groove-meets-Gothenburg vibe that enriches the album, and stick out as some of the better tracks.

The band do stretch their wings, however, with “The Quintessence Of Evil”, which is perhaps the most vibrant and uplifting song tonally, giving off Dream Theater vibes and feeling like a palette cleaner. Alongside “Vålnader”, which ends the album with a short, but colourful finish, Inhuman Spirits does have some level of variation, which is appreciated (foreshadow alert).

When a band self-produces an album, it can often lead to poor results. Inhuman Spirits, however, is a great-sounding album: vibrant and powerful, while also managing to balance melody at the same time. Each element is well balanced and sits well next to the others without sounding like an incongruent cacophony, as Mackrory’s melodic vocals sit next to Malmström and Ideberg’s crunchy guitars (which power tracks like “Embrace The Flames” and “A Spiral To Nothing”), while “Mansion Of Torture” balances all of this with some subtle but powerful orchestral flourishes.

As alluded to earlier, however, Inhuman Spirits does get to feel a bit repetitive and bland as you move further into the record, which is highlighted by the palette cleanser effect of “The Quintessence Of Evil”, only to delve back into what feels like more of the same with the following “A Spiral To Nothing”. Although this is not a deal-breaker, it does hinder playthroughs of the album as the songs begin to dull the further you get into the record, leaving the best listening experience to be short sharp bursts rather than in long sessions.

One of the big problems with the band not releasing any new music in nine years is that it leads to a level of anticipation and excitement when they do return; Darkane are no exception to this, and although Inhuman Spirits is a strong album, it isn’t as great as it could be overall. Tracks like “Embrace The Flames” are good, but do feel a bit formulaic, which limits the quality of the song.

Darkane make a sizeable impact upon their return after a far too long absence without new material, with Inhuman Spirits being a good, and sometimes great, record that will satisfy fans of the band. Although it does have its flaws, it is an enjoyable record that will make you remember the halcyon days when the Gothenburg scene was flourishing and wonder when it all started to dissipate.