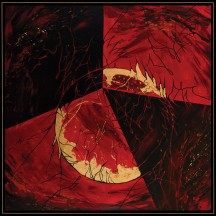 
01. Sepulchre Of Shattered Saints
02. Adamantine Amidst Transience
03. Severed Paragon
04. Ennoia
05. I Am The Father And The Tomb Of The Heavens


Generally one of the first questions that noobies ask when getting into extreme metal is "What's the difference between black metal and death metal?", and that's something that, at this point, we should be able to confidently answer. But when both genres play with dissonance and atmosphere, they can intertwine into inseparability. Like on Verberis' Adumbration Of The Veiled Logos.

As much as I'd want to take an album title that contains "dumb" seriously, a word that apparently means "to foreshadow vaguely", it along with the Bandcamp description veer a bit too much into the thesaurus-requiring kind. However this philosophical kind of word salad is not only far from the worst case of word salad, since it does make sense once you get over the obscurity of the vocabulary, but this is generally something does I've come to expect with this kind of atmospheric black/death metal, to the point where it kinda goes hand in hand. "Shrouded paradox of divine desolation", as the album's subject matter is described, does set some expectations for how cryptic and occult the album ought to sound.

And the simplest way to describe the album would be a blend of Deathspell Omega's dissonant black metal with Ulcerate's dissonant death metal. And the Ulcerate comparison is two-fold, as Verberis is from New Zealand too, and with the drumming style unmistakable and the drummer credited as JSM, it's pretty safe to say that this is Ulcerate's Jamie Saint Merat. I haven't got a clue who MP, DA, and NH are, nor if there were any lineup changes from previous Verberis albums, but Adumbration Of The Veiled Logos is definitely their most Ulcerate record, even if a lot of it comes from the drumming. And sure, other bands like Abyssal, Haunter or Tchornobog could also be namedropped for reference, but the influence of the aforementioned two bands still reigns supreme.

And as much as the two have been intertwined, Adumbration Of The Veiled Logos still feels like the scales are tipped more in black metal's favor, but only ever so slightly. As much as the album takes from the technical side of dissonant death metal, it is still more focused on atmospheres and layering. Thus, the album is more in the streamlined nature of Vorant Gnosis than the more manic Vexamen. This comes with pros and cons, as a lot of the idiosyncrasies that made Verberis stand out are diminished, but Adumbration Of The Veiled Logos does a better job at the long-form atmospheric songwriting, with its doom injections, labyrinthine riffing, fuzzy dissonance, intricate drumming, effective changes of pace and use of the dynamics therein.

The current saturation of everything dissonance might diminish Adumbration Of The Veiled Logos' impact, and the band does sometimes play a bit too much into that established sound, but there's plenty here to make it worthwhile even so.

Written on 28.06.2022 by
RaduP
Doesn't matter that much to me if you agree with me, as long as you checked the album out.
More reviews by RaduP ››