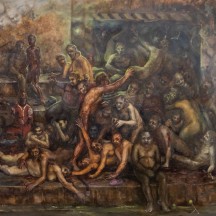 
Hearing that there's a band named "Candy" I was expecting some glam hard rock stuff. I was instead greeted by some of the noisiest hardcore out there.

I don't mean noisy in the "very loud and distorted" way, but in the "power electronics and harsh noise are part of the soundscape" noisy. Well, that's definitely not what I was expecting based on that band name. But still very fitting considering the artwork. "Book cover" expectations aside, this is a sound that Candy has been developing since their 2017 EP, Candy Says, and then their 2018 full length, Good To Feel. One is a full length and the other is an EP, but in true hardcore fashion, the EP is 12 minutes while the full-length is 17 minutes. Well, Heaven Is Here is a bit more of a full-length, since it passes the 30 minutes mark, but a huge chunk of that is taken by the 10 minute closer, a pure ambient noise track, so the core of Heaven Is Here is still just around 20 minutes.

Blends of noise/industrial and punk/hardcore are nothing new, going as far back in the 70s as Suicide's self-titled or Chrome's Alien Soundtracks, with the then emerging industrial metal and no wave all being somewhere at the tangent of these two. But noise and hardcore coming together is a bit more of a recent phenomenon, with most of the hardcore being either on the grind side (see Full Of Hell) or a more alternative glitchy kind (see Code Orange), not to mention the entire subgenre of noisecore (see The Gerogerigegege). Somehow, I don't remember anyone using beatdown hardcore, also colloquially known as "tough guy" hardcore, as the punk part of this blend. Candy is not exactly "what would it sound like if Hatebreed collaborated with Merzbow", but it's a pretty good starting point.

The album's best quality is that it's pretty creative in the way it blends the two. Instead of just playing whatever branch of hardcore they wanna play and then just blasting some static over it (even though there are some moments where it feels like they do that), the blend is twitched in pretty different ways. Sometimes the noise part is shown just through how overwhelmingly dense the production is, sometimes the noise pierces through very disruptively (see "World Of Shit"), sometimes the noise takes a more electro-industrial shape and overtakes the hardcore (see "Transcend To Wet" and "Kinesthesia"), but sometimes it's just a crutch that makes certain elements heavier (see "Hysteric Bliss"). And the last track, the 10 minutes noise closer, is still more interesting than I expected it to be, mostly due to the heavy echo of the vocals, and even if it basically uses the same soundscape throughout, it's still more dynamic than a lot of noise I had to hear in my life.

The hardcore side is still heavy as hell, often bordering on a 90s kind of metalcore (or metallic hardcore if you will), so even on its own it would be a pretty interesting listen, but it's made all the more interesting by its noise injections.

Written on 03.07.2022 by
RaduP
Doesn't matter that much to me if you agree with me, as long as you checked the album out.
More reviews by RaduP ››