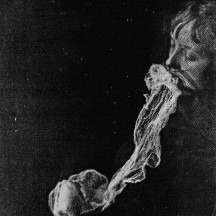 
01. The Great Anguish Of Rapture
02. Decaying Banners Of Existence
03. The Enigma Of Death
04. A Growing Void
05. Death, A Rot Beneath The Mask Of Existence


Mourning is an art form forgotten by many.

There are many ways to express mourning towards the deceased all around the globe. Modern western civilization has a more modest take on the subject, at least when you compare it with 1800s versions of mourning. In a time where photographs were a luxury, some people only had pictures of themselves taken once they were dead. Contrary to perceptions of creepiness by today’s standards, post-mortem photography was seen as comforting by the relatives of the deceased. “Forever mourning the dead and the living”: those are the words you find on Faceless Entity’s debut album, In Via Ad Nusquam. 5 years later, this mysterious black metal group reappear and dive deeper into the themes of death. The haunting image of a séance, as well as the front artwork of a woman exhaling ectoplasm, adorn the band’s newest output, The Great Anguish Of Rapture. This exquisitely sets the tone for the listener. This music is morbid, creepy but also carries a sense of melancholy, elegance and respect towards the dead.

Raw black metal can be very tricky to pull off. For a subgenre that proudly relishes its lo-fi sound, it is ironic how much this type of music depends on production to convey these complex atmospheres. From the top of my head I can recall a few recent acts that deliver the goods; Black Cilice and Pa Vesh En spring to mind, and serve as good points of comparison. Just like these two projects, Faceless Entity have also found a perfect balance between a raw and unforgiving sound, and the powerful riffs and hypnotizing songwriting. At first, the grim and ritualistic atmosphere gives The Great Anguish Of Rapture a doomy vibe not unlike Urfaust, although DSBM like Xasthur is not too far off either, especially once you take the desperate vocals into consideration. It’s not all harsh and gloomy though. The second half of the album, starting with “The Enigma Of Death'', launches some truly awe-inspiring riffs. They are relentless, bright, triumphant and with a great sense of melody as well.

While the debut was considerably more muddy and cacophonic, The Great Anguish Of Rapture presents a much sharper sound that really lifts up the riffs without sacrificing the rawness. It is very punchy and in your face. Even the bass is audible and during the fast sections it adds much-needed volume to the violence at display. The vocals are also highly prominent in the mix. The raspy howls surely do their part, but there are some excellent high-pitched shrieks and bestial growls that are truly unnerving. Just like on the debut, Faceless Entity spice things up with well-placed clean vocals with an almost folk touch to them.

Faceless Entity have successfully created a sophomore record that distinguishes itself from its predecessor, which can be a very hard thing to do in this genre. With focus on the riffs and varied songwriting, The Great Anguish Of Rapture is surprisingly accessible as well. Can’t wait to see what these ghostly figures come up with on their next album.

The séance is over and the candle lights are out.
We mourned the dead but also ourselves.