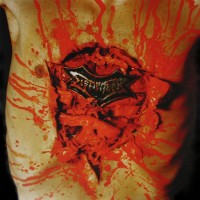 
The early 90's was a time when metal in general was really beginning to push the boundaries of music, with lyrics becoming more extreme, the sound becoming even heavier and more brutal, the vocals becoming harsher, and the album covers becoming even more gruesome and sicker. I can only imagine how the grisly, disembowelled body on the front cover of Indecent And Obscene would have looked back in the day when death metal was still relatively new on the metal scene, but we now tend to take all of this for granted, and so albums such as Indecent And Obscene will be the ones remembered just for this.

Taking inspiration from Morbid Angel and Death, we saw the emergence of much more extreme bands, such as Cannibal Corpse and Obituary from the U.S.A. whilst at the same time you had the Swedes starting their very own death metal movement with the likes of Entombed, and of course Dismember. So for me, the early 90s was the absolute pinnacle era for death metal, and even though there are still so many great new death metal acts out there, producing fantastic albums even today, the quality and sound of these early death metal releases will in my opinion never be matched.

What strikes me the most about the Swedish death metal scene in particular, is that fantastic guitar tone, which had that ripping buzz saw sound, first heard from their country mates Entombed on their debut Left Hand Path, and also on Dismember's debut Like An Ever Flowing Stream. But for me, the distinctive buzz saw riffs were truly mastered on this very album. Although not as impressive, nor as memorable as Dismember's legendary debut, Like An Ever Flowing Stream, I would still hold this album in high regards, and although I admit it doesn't match the debut in terms of originality and songwriting, I still believe it should remain a classic in its own right. Having said that, many would believe this doesn't even hold a candle to their debut, and every album that followed wouldn't even come close to this.

That being said there is no denying that some of the greatest sounding riffs in death metal are featured on this album, although it's relatively short at just over half an hour long, it still has such an impact with its real onslaught of groovy heavy riffs, one after another, there is also some excellent drumming skills, and some outrageous lead guitar playing, especially on "Dreaming Red", which is definitely the strongest track on the album for me, and could even well be one of the best songs in death metal history.

But there are other highlights to be found on this album: "Skinfather", "Reborn In Blasphemy", and "9th Circle" are also top quality tracks with phenomenal riffs. The album also flows incredibly well, keeping up the groove and heaviness throughout, and not letting off steam until the final track "Dreaming In Red", one of the greatest finales on any death metal record, a song I've already mentioned above as one of the all-time greats.

So as one would expect, this is a proper old school death metal album, there's nothing technical about it, the songwriting and song structures are kept simple, it focuses on it's very heavy sound, and simple yet groovy riffing, the vocals are harsh but not over the top. So if you enjoy a good old school death metal album to simply have a good headbanging time too, then you don't need to look much further than Indecent And Obscene.