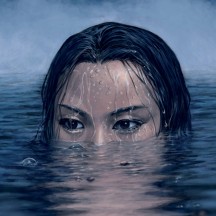 
Hard to think of a more eagerly anticipated grindcore album than this. Singapore's most famous metal export, one of grindcore's leading bands in the past decade, and a meme-worthy cover art all converge.

It does say something that a lot of the comments on the album page are images memeing the cover art, and it's not just because the faces on Wormrot albums have been getting gradually less putrefied and distorted until this logical conclusion, but also because it strikes a very specific scenario that transcends genre. If you saw that cover art without any context, would you guess it was a grindcore album? Even so, seeing it as a grind cover doesn't feel dissonant. But enough about the cover art, even if a lot of the comments are about it, it is also a follow-up to one of the most well-received grindcore albums of the 2010s, and the six years since Voices have cemented Singapore's Wormrot as belonging to the higher echelons of grind.

It is a bit of a let down that this is vocalist Arif's last album with the band, something that's made even more depressing considering how great his performance here is, and I can only imagine how well this would've translated to the live setting. The fact that this album packs a lot of energy is quite an understatement, and the 30 minutes runtime might actually feel extensive by grind standards, especially for a band that doesn't really go into slower more long-form territories. And yet, the energy it's packed with shows enough variety to not be needlessly bludgeoning nor rehashing. Grind has played around with tons of genre injections and outside sounds, so what happens on Hiss is not that wild or avant-garde, but there's more here than just "play fast and loud".

I'd say that this is the type of grind that is closer to punk than metal, which is pretty evident in some of the songs where that punky energy ironically reminds me more of crossover thrash than anything else, whether through its riffing or gang vocals. Punk influences come in many shapes, like screamo or powerviolence, but those feel a bit more expected compared to the thrashy mosh-worthy moments. Hiss has most of its songs sit between one and two minutes of runtime, with some songs falling under a minute or over two, and while the former are about as explosive as you can imagine, it's the latter that feel most rewarding with how creative they are.

Alongside the punkier moments, two of the most surprising elements found in Hiss are the black metal melodies that permeate some of the tracks, and the eerie violins that somehow don't feel out of place. And it's not just the elements in by themselves that make Hiss such an interesting album, but Wormrot have such a great skill at making engaging grindcore that twist things around subtly in its rhythms and structures without losing the genre's vital energy that they could've done a pure grind one and it would still be fun. Even with the more polished and dangerously-close-to-sterile production. Even without having a bass player.

What the future holds for Wormrot is a mystery for now. But at this point they created a pretty flawless catalog, and I'm so glad I was along for the ride. "Glass Shards" is such a massive high point to end on.

Written on 14.07.2022 by
RaduP
Doesn't matter that much to me if you agree with me, as long as you checked the album out.
More reviews by RaduP ››