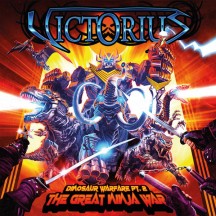 
All around me are familiar faces...Yeah, this really feels like a Pt. 2...

This whole new album of Victorius is exactly what you have come to expect from them: fast-paced songs with catchy melodies, tons of energy, and so much cheese that it could be deadly for a lactose intolerant person.

Truth be told, there isn’t that much to talk about with this new one from Victorius. It's good, simple fun. Is it as good as Pt. 1 or some of the other albums the band have made? It’s not far behind the quality of Space Ninjas From Hell, but I do feel like there are fewer standout moments on Dinosaur Warfare Pt. 2 - The Great Ninja War. You know, those kinds of earworms that you find yourself humming a couple of hours after you’ve listened to a record.

Performance wise, I can’t complain at all. Everything sounds as tight and powerful as ever. Great vocals, excellent riff work, bombastic drums, it’s all here. This combined with the excellent production manages to bring an overall compelling package.

I mentioned the cheesy nature of this album, and this is of course in large part due to the lyrics. I mean... I don’t think anyone who reads the name of the album would expect a literary masterpiece. It’s good, over the top fun. I’ve mentioned it multiple times before, but I do appreciate it when a band goes completely over the top, simply because it gives the record an extra bit of character in a sea of power metal records that take their mediocre lyrics way too seriously.

In terms of pace, Dinosaur Warfare Pt. 2 - The Great Ninja War flows rather well. Like a marathon runner, it finds its running pace right from the start and doesn’t really deviate from it. There are other albums (from other bands) in the past that gave me the same impression at first, but then suddenly halfway through the album they trip and stumble into a ditch. This could be because of a song that feels very much out of place, or is just not positioned all that well in the tracklist order, or an album can simply run out of steam. This album doesn’t suffer from that, even though it doesn’t really change all that much in terms of its formula for the songs. It is not like a sea, where you’ve got a bit of an ebb and flow feeling to it that adds to the overall journey. No, this is more like a fishing pond, where the water stays relatively still but consistent as well.

Is this the most memorable record from Victorius? No, I think most of their other records are more on the memorable side, especially Dreamchaser and even the previous record, which is really similar in style. But in that case, there’s of course also the fact that it’s basically Pt. 1 again. Anyway, that being said, I did enjoy my time with Dinosaur Warfare Pt. 2 - The Great Ninja War. A perfectly enjoyable record, which, for people who wanted more Space Ninjas From Hell, is an easy one to recommend. I liked it and am completely satisfied with these 2 parts. But let’s just say that I hope the next one will be something more surprising. And like with most films, a part 3 isn’t necessary for me. We’ve had a good time with these 2 parts, no need to spoil that.