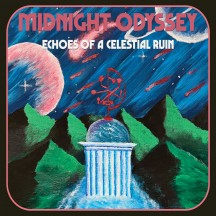 
01. Celestial Fires On The Path To Antares
02. Ruins Of A Crystal Sky
03. A Symphony In Stardust
04. Tundras Hidden From The Sibling Suns
05. Ashes From A Terrestrial Fall
06. The Stars Through Smoke-Filled Eyes
07. Of Desolate Poison Oceans
08. Lost Planets Of The Orrery
09. Under The Alien Sea
10. Moonbeams On The Sunken Graves
11. As Death Rises From The Thalassic Deep
12. The Tombs Of Legends Past


Don't get overly excited about this being Midnight Odyssey's longest release, it's but a compilation of three ambient albums.

Long albums and Midnight Odyssey go hand in hand. We don't have info about track or album lengths on Metal Storm, so I do have to give you a bit of a quick rundown. The only Midnight Odyssey album that is more than two minutes shorter than an hour is the project's first demo, The Forest Mourners, at 40 minutes. Everything else has had at least 58 minutes of runtime, which is admittedly not a huge runtime for a cut-off point, but then you see Funerals From The Astral Sphere at 2h5m and Shards Of Silver Fade at 2h23m, Biolume 1 at 1h11m, Biolume 2 at 1h43m, you might start to see a pattern. And these are the usual ambient cosmic black metal works of the project. You might notice that the ambient and cosmic sides are pretty well developed in Midnight Odyssey's sound as it is, so it wasn't that big of a surprise when, in 2020, the project released two albums that specifically focus on the space ambient side in the sound.

Ruins Of A Celestial Fire and Ashes From A Terrestrial Fall were at more manageable 1h1m and 59m respectively (hence why my initial cutoff point was the awkward 58m instead of the precise 1h), and they're the explanation as to why Echoes Of A Celestial Ruin stands at a towering three hours (and 46 seconds), as it compiles both of those releases, as well as a new one that was releases concomitantly with this compilation, namely Echoes Of The Thalassic Deep. You might be wondering why I'm reviewing the entire compilation which has 2h of already released material instead of just reviewing the already separately released new album. First, we already covered both of the previous two releases in our non-metal feature, and I'm planning to include Echoes Of The Thalassic Deep in the next edition (but don't quote me on this) since it would be weird for just this one to be on the main page. But the main reason is that Echoes Of A Celestial Ruin works pretty well as its own stand-alone gargantuan three hours space ambient epic.

Obviously now that I'm willing to tackle Echoes Of A Celestial Ruin as its own thing, we have to tackle the runtime a bit more seriously, because three hours is no joke. I have often made cases for really long albums, usually ones that feel like the runtime removes the comfort of the casual listen, thus making the experience feel more like a rite of passage. At the same time, I also feel like a lot of moderately long albums have no business being as long, and they can feel like they're running out of steam quicker than they should. Ambient is a genre that renders itself quite well with longer runtimes, a case I've made before, but it can work really well as a shorter detour too. It's a two edged sword. Can quality be maintained over longer runtimes or should consistency be sacrificed for an aura of grandiosity? This is something that has permeated Midnight Odyssey releases past and present, with their presentation certainly hitting that grandiose vibe while being admittedly a bit too self-indulgent in terms of how that runtime is used.

But why I'm willing to give longer ambient albums more of a pass is because the purpose of the music falls a bit further away from the usual entertainment of music, metal or otherwise. There's a reason why it is the go-to soundtrack genre. It's music that should work both in the background but still be interesting enough in the forefront. It is the kind of music that one can play while doing something else, like reading, and it should not be distracting, while also being immersive if given the chance. Naturally this does give way to criticism about how it's actually boring, and how the long-form and sparse songwriting is low effort. I know I shouldn't try to explain the appeal of ambient music every time I review it, but I feel like it is such a rewarding genre to finally understand the appeal of. A three hour ambient album means three hours in which I'll have the perfect background music for whatever I'd be doing, thus, in a way, it is more useful in its longer form. I don't mean to claim that length for the sake of length can fly just because it's ambient and it has a certain utility, but since I'm no longer at my first listen through Echoes Of A Celestial Ruin, and I still don't feel like turning it off to play other ambient albums when in the mood for ambient, that's all I could've hoped for.

Echoes Of A Celestial Ruin doesn't reinvent space ambient. The blueprint was already created 50 years ago by acts like Tangerine Dream, Klaus Schulze, Steve Roach, Brian Eno, a lot of whom also had their hands in a myriad of other genres, ambient-related or not. This sounds a lot like Midnight Odyssey without the black metal part due to how much of the project's sound is a direct result of that blueprint. Sure, there's a bit of dark ambient and dungeon synth that also informs the ambient of Midnight Odyssey, but fundamentally, it is retelling the same story of a cosmos we saw in the eyes of sci-fi futurism, a vision that sometimes felt more hopeful than the one we have today, a future that feels anchored in a past time. But space is still out there. And it's huge. Just like a 3h album. Midnight Odyssey just follow a long line of filling that space with synths.

Written on 26.07.2022 by
RaduP
Doesn't matter that much to me if you agree with me, as long as you checked the album out.
More reviews by RaduP ››