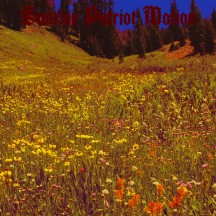 
You can trust the Skarstad bros to finally create a definitive blend of gothic rock and black metal.

There's something quite inherently gothic about black metal. Makeup to attempt to look pale and dead? Check. Somber and not fun? Check. Fascinations with ruins and castles and forests and the occult? Check. Originated in Southern Scandinavia? Check. Wait, that's the wrong goths. Whether it's the 12th century gothic art, late medieval gothic architecture, 19th century gothic literature, or the 20th century gothic subculture that birther goth rock, all the way to black metal itself, all seem to share a somber and macabre view of art. You can spend all day hunting gothic motifs in black metal, but there's a reason why Taake can cover Sisters Of Mercy or Carpathian Forest can cover The Cure. Or why Rotting Christ can have an entire goth phase.

Which brings us to Sunrise Patriot Motion, a band name with a debut's album title and album cover than I can't make much sense of either of those, even if I dig flower black metal. I'm already pretty familiar with what the Skarstad brothers have been up to, having reviewed the latest Yellow Eyes and the latest Ustalost. Neither of which felt specifically gothic, but also I was not surprise to hear they were behind this project. Joined by Blaze Bateh on drums and Andy Chugg on vocals, it is the latter that actually gives the album a lot of its black metal-ness.

It is a bit of a stretch to call this one a metal album, let alone a black metal one. The vocals are the only thing that sit unquestionably within the metal genre, and even those can take a bit of a hardcore leaning at times. The riffing takes the melodicism that is often present in black metal, something that is arguably the genres biggest Venn diagram intersection with goth rock, and builds upon that intersection to create a surreal sound, something to reflect how uncannily colorful the cover art is too. It's inverted bliss, melodies sun drenched until they turn lamentful. And in a way, this is more of a post-punk / goth rock record, but even by the standards of those genres, it doesn't feel cold, which is something that ironically it shared thematically with black metal. Even the dungeon synth leaning synths feel sun drenched. Maybe it's the cover art or the current heatwave that is removing all icy imagery from my brain, but with how the production manages to be both airy and dusty, and with the melodies feeling strangely manic and euphoric, it does create a weird atmosphere to say the least.

Though I do have to ask: is it goth to dig for oil in a field of flowers while in a manic state? Asking for a friend.

Written on 16.08.2022 by
RaduP
Doesn't matter that much to me if you agree with me, as long as you checked the album out.
More reviews by RaduP ››