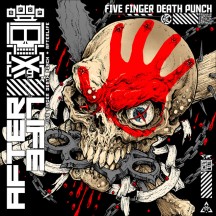 
Back from the dead.

Perhaps thanks to my guilty pleasure of loving cheesy music or Stockholm syndrome from associating with people who are unabashed Five Finger Death Punch fans, I've grown to somewhat tolerate the band's cheesy brand of radio metal in small doses. With F8 coming surprisingly close to being a good album, I dared to have a level of expectation for the follow-up. Well, AfterLife is here and it's time to see if it was a one-off or a sustained push by the band.

Now, hold off on the straitjacket for a moment people, I've not taken leave of my senses; I'm just taking a holiday from them temporarily. AfterLife is one of those records that if you put it on in the background, you will find yourself tapping your feet and nodding your head rather than banging your head against a wall, as has been the case with the band's prior work.

Five Finger Death Punch are a band who have developed a reputation of being formulaic to a fault, being as predictable as the latest installment of The Fast And The Furious. Afterlife is perhaps the breath of fresh air the band have needed to avoid becoming stale and stagnant. The group throw convention to the wind for the better on "Times Like These" and "Thanks For Asking", both of which will almost certainly surprise you. To a lesser extent, "All I Know" and "Judgement Day" will provoke a similar double take when they come on.

To add to this apparent turning over of a new leaf, Bathory switches things up to an extent also. The heavier stomp of "Gold Gutter" shows he is at least pulling tighter on his bow, if not adding a new arrow to it. While he still produces the same stock chug-athons on tracks like "Roll Dem Bones", he doesn't keep returning to the same trick like a casual player in Tekken, spamming the same move over and over until the opponent gives up from sheer monotony.

Strangely enough, for all the band's switching up of convention, it is the title track that is perhaps the most addictive songs on the album. While it follows the same formula that has gotten stale, it has a quality about it that will get stuck in your head after it has finished.

The more things change, the more they stay the same; with all the change of scenery around him, Moody continues to rage against a world of energy drink-induced imaginary foes. AfterLife is the latest in the ongoing saga of Moody against the world, one to which you are forced to endure if you want to listen to the new album (no surprises what "Welcome To The Circus" is about). It wouldn't be a Five Finger Death Punch album without some cringe factor, and out of all the habits the band have tried to break, this unfortunately isn't one of them. I was not even able to make it past the album opener "Welcome To The Circus" without facepalming, with the line "diggy diggy dasket time to burn the casket"... I'll just let that sink in with you for a moment.

As you can imagine from lines like that, the album does have its share of things wrong with it. The lack of variation in production hinders the impact of elements within the album. The aforementioned stomp in "Gold Gutter" isn't as impactful as it could be, had it been given a crunchier tone. This somewhat middle-of-the-road sterile sound is perfect for the radio, but not ideal if you want to really drive home a powerful riff.

Is this likely to be a contender for album of the year? Of course not, but is it likely to be a contender for worst album of the year? More than likely not. It's a small step in the right direction and one that sees the band continue to make improvements, though it's a long road to redemption, and Five Finger Death Punch are taking the scenic route.

Written on 24.08.2022 by
omne metallum
Just because I don't care doesn't mean I'm not listening.
More reviews by omne metallum ››