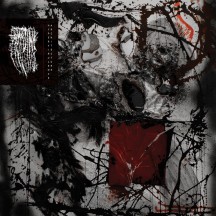 
Existence is a formless void, life is a virulent parasite, and the doors of perception are roaring hallucinations in a lift crashing down a solipsistic mineshaft. I like the sound of that, do you? Here’s some discordant death to soundtrack your life.

If the idea of not having your bookmarks sorted alphabetically and by category, date, and priority sounds repulsive, I’d bet you might find Hypervirulent Architecture equally detestable. If you don’t even have the most basic of thoughts in order most of the time (or just want to know what that sounds like), and keep pondering to which degree we are all psychotic aberrations marooned in a fractal nothingness, however, join the club and join Hissing for a ride.

Seattle’s Hissing’s take on blackened death of is the chaotic, dissonant kind. A kind that takes the unshapely, grotesque death of Portal, adds a teaspoon each of Decoherence’s blacktrance tremolos and Ulcerate’s textural sensibilities, then tops it off an Abyssal, rioting old-school crunch. Their sound is equal parts catchy and abstract, which makes them very accessible to a new listener of the dissonant and deconstructed sort of extreme metal. It is not a match made in hell (this is a good thing) by any means, but it has some very promising qualities.

Hypervirulent Architecture is Hissing’s third full-length effort, and if this had been a debut, I’d have been mightily impressed. I’m still quite impressed. “Cells Of Nonbeing” blasts out of the gate with an unrelenting, thrashy dissonant riff that halfway through breaks down into… well, another unrelenting, thrashy dissonant riff. It really works. The bass is just about audible enough (I wish it were slightly more prominent!) and the drums accentuate the disgusting (this is, again, a compliment, of course) guitars perfectly. It is, however, somewhat uninteresting to me. It is not until the second track, “Hostile Absurdity”, that Hissing start to connect with me.

“Hostile Absurdity” is one hell of a song. It starts out well enough, with the reverberating, off-beat sort of death riffs that trademarked the first track, then chugs in with an entirely danceable groove for just long enough to make you miss the riff when it’s gone, enters into a blackened death style tremolo, until the 2-minute mark. After two minutes, the entire song transforms into something like a distorted, evil, simply wrong version of a Bach fugue, with a descending riff that just like aforementioned fugue seems to reach its end just as the next repetition begins, and it’s pretty glorious.

I have to say, though, that this trick doesn’t work all the way for me. “Operant Extinction”’s 10 minutes would’ve worked if the atmospheric parts had been worked on a bit more, and while the atmospherics return in “Identical To Hunger”, most of these tracks build on the exact same sort of riffs: descending tones - ascending into trebly wails - accentuating war drums - repeat. It’s not enough for me to sit through an entire album of it, as much as I do like the better parts of what is being offered here. The vocals would have been better without all that overreverberation, as well. Record them in a proper space with some proper micing and they will sound just as cavernous and evil, or better, even, as they do with all the post-production done on this effort.

All in all, this is a great release, albeit slightly frustrating at times. Definitely recommended for the ones who can’t get enough of the bands I namedropped in the beginning, and the potential is obvious. I hope Hissing eventually manage to fulfill it.