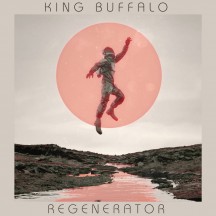 
King Buffalo were going to put out three albums in 2021, and the third album only arrived in September 2022; shambolic productivity from the trio, it has to be said.

In all seriousness, I’m coming to accept that each year, I’ll be reviewing at least one King Buffalo and Teramaze album, particularly with the latter’s newest album announced for an October release. This productivity does have the downside that I have to find ways not to repeat myself with each new review, but on the plus side, the albums are reliably enjoyable. For King Buffalo in particular, after the uneven 2020 release Dead Star, the Rochester three-piece have now smashed out a very solid ‘pandemic trilogy’ that both separate themselves from one another enough to highlight the group’s range of strengths while also complementing each other very neatly.

With each of my three previous King Buffalo reviews, I’ve had the tendency to compare each one to Longing To Be The Mountain, the 2018 sophomore record that served as my introduction to the band. Well, parts of this album represent the closest that King Buffalo have got to the sound of that record since its release, as this is the gentlest of the pandemic trilogy releases. It’s not like either The Burden Of Restlessness or Acheron were particularly heavy by any means, especially the latter, but the chill airiness of “Avalon”, the spacious clean tones of “Interlude”, the head-nodding delicate central groove of “Mercury” and more veer pleasantly close to the gentle hippie vibes of Longing To Be The Mountain.

Still, Regenerator isn’t one-dimensional, and most of the songs listed above offer at least some moments of cool heavy stoner fun, while one can also encounter cool bluesy scene-stealing solos on “Mammoth” and up-tempo dirty desert rocking on “Hours”. Bookending all of these songs, the two 9-minute beasts that open and close the album offer perhaps the widest range of tones on offer across Regenerator. The opening title track is on the fast side, but primarily focuses on clean tones, gentle grooves and light-natured tranquil rock, even with some high-octane psychedelic jamming solos interspersed. In contrast, “Firmament” closes proceedings on a heavier note; the opening couple of minutes of this song almost remind me of Porcupine Tree in the way that Sean McVay’s understated vocals interact with the subdued background instrumentation, but when the band kick it up a notch, they bring a serious dense heaviness; the final climactic riff of the song and album is a bruising crawl to the finish line that demands your headbanging participation.

Regenerator consolidates the steps that Acheron took in balancing heaviness with mellowness, and sees King Buffalo seemingly looking both forward and backwards simultaneously. With a bit more variety in songwriting compared with the 4 similarly-lengthed songs that comprised Acheron, Regenerator brings this trilogy to a pleasant and satisfying conclusion. Now that this ambitious project has been completed, it will be interesting to see whether King Buffalo maintain this prolific output, or give themselves a moment to breathe before pressing forward; if they opt for the latter, they’ve left fans with plenty of material to enjoy while they wait.

Written on 08.09.2022 by
musclassia
Hey chief let's talk why not
More reviews by musclassia ››