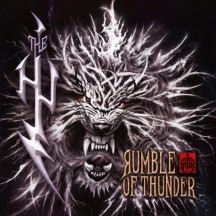 Seemingly coming out of nowhere in 2019 were Mongolian metallers The Hu, brandishing a refreshing and new twist to the traditional rock formula with their Mongolian folk-infused stylings; to say their follow-up effort is heavily anticipated is to underestimate the band's impact.

Three years on and the band's debut album The Gereg still feels fresh and vital, highlighting that the band were more than a mere novelty. Black Thunder shows the band are not one-trick ponies, showing a further level of evolution in their sound when the band could have been excused for resting on their laurels the second time out. Black Thunder mixes their Mongolian folk rock with an overt poppy twist that only makes their sound that more addictive and ear-catching.

"Triangle" sounds like the band were trying to soundtrack a Hogmanay party, replacing drunk Scotsmen with upbeat and anthemic Mongolians (fun fact, both are equally as hard to understand). "Bii Biyelgee" sounds like Slade if they came from the Steppes, with the band having an ear for glam rock. "Upright Destined Mongol" reminds me of T-Rex's "20th Century Boy", managing to capture nostalgia without themselves paling in comparison. The band do ensure to keep a few tracks in the vein of their previous album, with the title track, "Segee" and "Shihi Hutu" ensuring the band deliver on those wanting more of the same without sounding like uninspired obligations to fans.

While the decision to give the tracks English titles is a welcome way to prevent blushes as you try to recommend hard-to-pronounce titles to your friends, don't be fooled into thinking you will be able to understand much of what is going on without having undertaken an intensive Duolingo course.

The only track that could do with being left on the cutting room floor is "Yut Hovende", a slow laborious song that kills the momentum from the strong opening track and gives you a bad feeling that the band couldn't overcome the sophomore slump; thankfully, by "Sell The World", you know this is not to be the case.

The production has an odd compressed sound to it that i'm not wholly sure I like, feeling inorganic, though not to the detriment of the music. Whereas The Gereg felt natural and expansive, this feels more constrained and processed, losing some of the charm of the music.

As a fan of the band, Black Thunder is the kind of follow-up album you want, one that balances their past sound while also looking to move forward and grow. Those who are on the fence with the band may not find much to get them to come down on one side or the other. but at least you are still listening one way or the other. Now, if you don't mind, I'm off to practice my Mongolian so I can sing "This Is Mongol" the next time I do karaoke.

Written on 11.09.2022 by
omne metallum
Just because I don't care doesn't mean I'm not listening.
More reviews by omne metallum ››