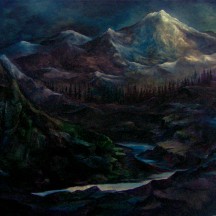 
Extreme doom isn’t my most beloved category of metal, but every once in a while, an album comes along that really makes me pay attention; this is one of them.

“Elläkkairavertta”, if Google can be believed, translates to “pensioner’s blood”; any Finns on the site, feel free to provide a more accurate translation, as it’s not the most obvious name for a funeral doom album (well, I suppose pensioners and funerals are somewhat linked). Whatever the correct meaning of this album’s name is, Elläkkairavertta represents the fifth full-length outing of Canada-based one-man project Ego Depths, helmed by the Ukrainian-born Stigmatheist. That’s already two countries in the background of this album, but what makes Elläkkairavertta so intriguing to myself is just how much it draws from World music.

If you isolated the metallic portions of Elläkkairavertta, they would sound pretty conventional for the style; you’re looking at dense, plodding riffs moving at glacial pace, nudged along by sedate drums, and accentuated with thick, deep growls and sorrowful sustained guitar leads. There’s a few points at which the metal switches track, such as a blasty segment towards the end of “Anatta” and midway through “Bya Gtor”, but really, what makes this album remarkable is everything surrounding the metal. The thing is, there’s enough surrounding the metal that the typical instruments almost feel like secondary contributors here at times.

There’s a heavy ritualistic atmosphere to much of Elläkkairavertta, with this tone set early on with the clinking wood percussion and bleak, noisy drones that set the scene at the beginning of “Anatta”. Eventually, the ominous build of these first minutes is taken over by guitar distortion and growls, but even after making this switch, there are numerous other instruments and sounds filling the mix. The Bandcamp page for the record credits the dan moi and Aztec death whistle as featured instruments, while on this song alone I can hear the twang of a sitar, sustained chants and throat singing.

The first two songs feature extended periods of ritualistic/neofolk drone and ambient sounds, but the closing duo “Bya Gtor” and “Chod” ramp this up further; the way that the array of voices, percussion and droning instruments sit so naturally alongside the trudging funeral doom shows this combination to be an incredibly logical one, yet it’s not one I’ve encountered with any degree of regularity. “Chod” builds upon these non-metal sounds for almost 10 minutes before bleeding metal into the equation, and it feels like a rational progression from what preceded it.

Thus far, this review has effectively amounted to saying ‘Elläkkairavertta is funeral doom mixed with neofolk/World music’. To be honest, I’m not sure if there’s all that much more that I can say, except that: it works. The combination takes a steady funeral doom base that would be perfectly adequate, if unexceptional, by itself, and builds it into something that I find a lot more fascinating than most albums in the style, and it’s because all elements, and their fusion, are really well executed. The end result is densely atmospheric, and remains compelling for its lengthy hour-plus runtime. A quick look back to the previous album from Ego Depths, Dyrtangle, shows that this combination is not new to Stigmatheist; however, this new album does perhaps feature a more extensive integration of the sounds within one another. It’s a next step that takes an already inspired concept and further matures it, and the end result is a fresh, invigorating take on the concept of slow, despondent doom.