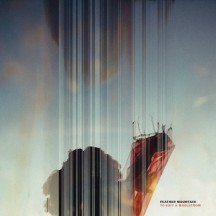 
To Exit A Maelstrom teaches me something that I already knew; feathers are as heavy as metal.

Feather Mountain hail from Denmark, and To Exit A Maelstrom represents their second full-length album, 3 years on from debut Nidus. The quartet include brothers Andreas and Christian Dahl-Blumenberg, and this album, inspired by their relative’s battle with Alzheimer’s disease, thematizes the decline of a beloved family member to the disease, and the maelstrom that both the sufferer and their relatives find themselves in as a result. This isn’t the first recent prog album inspired by such a concept; The Reticent’s The Oubliette immediately comes to mind, and I’m sure there was another thematically similar record in the past couple of years that is just out of my mind’s reach while writing. However, as the prevalence of Alzheimer’s continues to increase, it may be expected that more will follow in their wake, particularly as such an emotionally charged topic lends itself to heaviness, both musically and lyrically, as Feather Mountain display here.

Stylistically, To Exit A Maelstrom lurks somewhere in the nether region between alternative metal and prog metal, much like a litany of acts such as Tool, Karnivool, Soen, Wheel and more have previously. It’s a musical area that lends itself to evoking emotions, as the technicality and exploration of prog is tempered by the grounded emotions and delicate atmospheres of alt. Further thrown into the equation here is a clear djent current, one that persists off and on throughout the album, but breaks through especially strongly on the likes of “Pariah”, "Cloud-Headed" and “Air Hunger”. With occasional harsh vocals to go with the delicate soft and passionate forceful cleans that otherwise dominate the voice of the album, there’s a breadth of intensity that is explored across the record by Feather Mountain.

This becomes clear from the off; the opening riff of “August Mantra” points towards Gojira, but the band immediately bait-and-switch into a quieter verse during which clean guitars dance around evocative vocals in a way that reminds me of some Wheel passages. While most of this song otherwise dwells in the subdued, a push forth into more exuberant and complex groove later on, with djenty twang and all, gives off pleasant TesseracT and Karnivool vibes.

Feather Mountain put care into exploring how to manipulate the overlaps of heavy and softer sounds, whether it’s the melancholic guitar layer late in “Beneath Your Pale Face”, or how clean singing during the early djenty groove of “Pariah” is replaced by hushed screams when the same song softens (when the song is hitting maximum intensity, those same grooves are then accompanied by harsh roars, for a nice twist). This persists right through to arguably the most aggressive moment on the record, at least on the percussion front, when a sequence of blasting by the drums late in “Sincere” is taken in a euphoric metalgaze direction by shimmering guitars tremoloing on top.

The influences on To Exit A Maelstrom appear to be fairly numerous, and can be encountered on different songs. The sickly sweet singing during the gentle first half of “Sincere” absolutely screams ‘Maynard Keenan’ in a way most of the other singing on the album doesn’t; one could definitely imagine this section appearing in a song from A Perfect Circle. The much livelier Bliss and its syncopated rhythms owe a lot more to Leprous, as well as perhaps someone like Rishloo. Following immediately afterwards, despite the djenty edge to the guitar tone, “Air Hunger” takes my mind first to some of Porcupine Tree’s heavier instrumentals from the early/mid-2000s.

Still, it’s not an album that relies on its influences, but in order to shine by itself, To Exit A Maelstrom needs to convert its promising ideas into rewarding songs. Feather Mountain get off to a bit of a slow start on this front, with the double-header of “Beneath Your Pale Face” and “Pariah” not quite winning me over entirely. It’s really with “Cloud-Headed” where the Danes go to the next level; the innate passion of this song both vocally and instrumentally leaves it primed to win over listeners, particularly fans of acts such as Caligula’s Horse, and that’s before a particularly memorable lead guitar section late on ups the ante further. From this point on To Exit A Mountain consistently delivers with its variety and quality, and the ambitious 10-minute closer “Maelstrom” caps the record off with aplomb.

Feather Mountain aren’t quite as accomplished as some of the other names in this nebulous musical Venn diagram yet, but hey: none of Karnivool, Soen or Wheel came out fully formed. Despite some of the rough edges compositionally and production-wise, To Exit A Maelstrom is a well-crafted and moving record that does justice to its subject matter, and paves the way for further success down the line for the quartet.

Written on 20.09.2022 by
musclassia
Hey chief let's talk why not
More reviews by musclassia ››