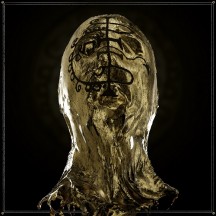 
Some black metal is so emotionally charged that it becomes pure exalted beauty. If somehow you have altogether missed Unsettling Whispers and/or Limbo, you are officially out of excuses and you must feast upon the greatness of Mirage. Portugal's Gaerea is a group of expert musicians clad in black who have been dwelling in anonymity, dark imagery and technical mastery for years now. This is no mirage. If it were, I just would not want it to dissipate. Mirage is a brilliant album in many ways. Gaerea's best album to date by my account, which is not an easily bestowed label. Let's get to it, shall we?

Where to start? The production? Yes, the production. It is out of this world. Clean as a whistle and somehow balancing brilliantly between vocals, guitars, bass, and drums, allowing the purity of their sound to hook you both whole and in pieces at the same time. The impeccable cymbal work has as much room as the colossal bass lines in the mix. So, to producer and sound engineer Miguel Tereso of Demigod Recordings, we salute you. Your business is aptly named.

The raw emotions expressed through the growls and grunts of Gaerea's singer have only gotten more visceral since the previous album. I don't know how that's possible but the end result is just that. The fact that the pure intensity of their music manages to cohabit with this emotional expressionism is still mind-bending to me. Their music is like poetry in motion. A poetry that punches you in the heart of the soul.

The opener "Memoir" has such power, depth, and flair that it had me loop-repeat it about ten times before I could even move away from it and listen to the rest of the album. Black metal has rarely done this to me. What is happening? Once I was able to fully appreciate it and move on, I was thrown into another maelstrom of epic proportions with "Salve". It is a blitz juggernaut of power and sounds like Dark Funeral wrote a Mgła killer song and invited Dissection in the studio to record it jointly. Look, Mirage is a beast of an album without a wasted moment an absolutely no fillers. I could "song-by-song" it and come up short talking about its greatness. For good measure, let's mention that spine-tingling off-tempo guitar solo on the splendid "Arson" and the ever-evolving title track that features a very tasty slowdown in the final break. "Laude" is a fitting album closer, though the bonus track "Dormant" doubles down on a good thing, like ice cream can compound some dark chocolate on the dessert-scale of simile.

This album is massive. This is black metal done right. This is a grand gut-wrenching story told through eight (or nine) tracks of the highest quality that is sure to move you if you can withstand both the onslaught of raw power and raw emotions. After listening to Mirage, I feel my consciousness has been elevated to new heights. You too can live again in a more fulfilling way, by listening to Gaerea. Do it.

“Life is but a walking shadow. The act of taking advantage of the great disadvantages of consciousness of one's experiments. Mirage is nothing but a prototype and painful dream where the necessary sufferings of being alive shall create the unnecessary fear of our demise."
(Quote from their promotional material)

Written on 25.09.2022 by
Dream Taster
Bringing you reviews of quality music and interesting questions such as: