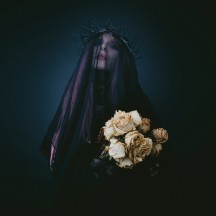 
Do you like your doom metal witchy, hypnotic, and ethereal?

As we are entering "Spooktober", even though Skin & Sorrow was released in September, things with a vague horror appeal start resonating a lot more. Eyeing horror movies, being surprised that Cradle Of Filth are still going, dreading the fact that Halloween isn't that popular in your country, all that jazz. Normally I wouldn't associate Frayle with horror per se, but there's something in singer Gwyn Strang's entire presentation that moves beyond just the general Instagram witchy vibe and does move into something that does feel pretty specific. From the weird fashion to the ethereal vocals, there's an uncanny horror aspect that only gets stronger with this season. In the eternal words of Donovan: "Must be the season of the witch". Not to be mistaken for the Nic Cage movie of the same name.

"Doomgaze" is a term that I've been using more and more often as a lot more music seems to fit it. Both doom metal and shoegaze are actually fairly wide umbrella terms, with doom covering everything from traditional doom, stoner, sludge, post, drone, funeral doom, gothic doom, death doom and all the variants within, but shoegaze also has a lot of varying flavors to it, from noise pop, dream pop, ethereal wave, slowcore, space rock all being pretty close and sometimes interchangeable (explore for yourself). Skin & Sorrow isn't a shoegaze album, so pinpointing where the gaze comes from does lead to something more in the vein of ethereal wave, and a particularly dark kind of it. I mean "ethereal" is pretty much the major descriptor word I'd use for it, though it's a more malevolent kind of ethereal than something like Cocteau Twins.

If you've noticed me talking about the vibe and sound and presentation of the record rather than the actual songs of it, it's because it does feel like Skin & Sorrow puts more emphasis on one over the other, as very little in terms of individual songs or moments is sticking out for me, instead the entire experience of the record is pretty consistent all throughout. Consistency is a double edged sword, nothing feels out of place and nothing feels surprising. With that out of the way, the likely reason why the record favors atmosphere and vibe it that it's pretty good at it, and ethereal vocals with heavy riffs and ominous atmosphere is a winning combination that's not gonna go away anytime soon. I'll try to manifest some more variation into their next album, and enjoy it as it is.

Now, with witch doom metal out of the way, time to search for some vampire black metal.