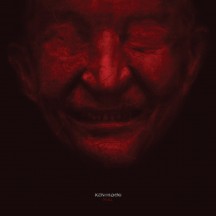 
To activate KEN Mode, place all your inputs on NULL. This will result in 35 minutes of noise, nausea, and misanthropy.

In the early-Swans-influenced side of the music world we have the more hardcore sludgy type of noise rock, with acts like Unsane, Kowloon Walled City, and Harvey Milk being at the border, and then the wildly varied Today Is The Day, but then you also have more recent bands like Chat Pile and Couch Slut. Thus, KEN Mode have been in very good company on metal's outskirts into other types of heavy music these past twenty years. And with Chat Pile's recent success, this truly feels like a sound that is still vital. KEN Mode have been at it for quite a while, but it seems that only lately they're getting their real dues, which has also been my experience with them since I found out about 2015's Succes / Nerve EP combo and then I loved 2018's Loved.

With four years since their last and most widely acclaimed album, Null finds the band in a bit of a different spot. KEN Mode's music has always been violent and vitriolic, but with the pandemic and recent events in mind, it feels like a lot more vitriol has went into the fuel for this album, and it really does feel like the end result of some folks that absolutely loathed the past couple of years. Not only that, but KEN Mode are literally in different shape, as the trio is joined by Kathryn Kerr, who performed saxophone on 2018's Loved, now performing that alongside a myriad of other instruments to ensure that Null has just the right sound palette for all its vitriol. The sheer anger of the sound still does most of the heavy lifting, so it's not like Null finds the band completely out of the box in terms of incorporating extra instrumentation, but it adds a nice touch occasionally.

In addition to the extra instrumentation, the band is pushing a bit further in incorporating the no wave and industrial influences here. All of these are particularly obvious on the slow-burner 10 minutes track "Lost Grip", where the "I don't believe that you mean well" and "We deserve this" repeated lines along with the strong bass groove and the atmospheric synths build up into something more and more menacing. Placing that song closer to the middle of the album rather than at its end is a pretty inspired choice, as the album itself is bookended by its most vitriolic tracks, with the closer in particularly feeling like one of the best the band has ever made. The production might've used a bit more grit and groove, but the ominous dissonance still seeps through with no issue.

It's still hard to say how this will stack up to KEN Mode's discography retroactively, especially since the band will apparently release a companion album to it, which would require even more retrospection afterwards, but for what it is, it proves KEN Mode's continuous dedication to unflinching music.