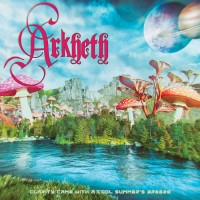 
01. In The Cradle Of The Crescent Moon
02. Kundalini
03. Psychonautica
04. Neptune Beaches
05. Patience In The Garden Of Fire
06. Where The Ocean Meets The Sky


There's something about experimental music that reminds me of early man's first encounters with mushrooms, and figuring out which ones are good to eat, which ones kill you, and which ones make you see God. I think I know which ones Arkheth prefer.

Arkheth wowed quite a lot of us with 2018's 12 Winter Moons Comes The Witches Brew, a batch of colorful psychedelic black metal whose bizzaro psilocybin vibe left a marking impression. It was actually later that I found out that there's more of a history behind Arkheth, initially starting out as more of a symphonic black metal band, before becoming the one-man band oddity we know it as today, so 12 Winter Moons Comes The Witches Brew was indeed sort of a paradigm shift for the project. I was pretty eager to hear how the project would evolve, and I am pleased to say that this one is more than just 12 Winter Moons Part 2, even if me and Clarity Came With A Cool Summer's Breeze might not always see eye to eye.

Probably the biggest change is that the sound seems less focused on the black metal side of things. It still has some presence, but just like a lot of experimental black metal, it eventually pushes the prog or avant-garde or psychedelic or electronica elements forward in the detriment of some of the blasts and aggression. This is made pretty evident by the overabundance of clean vocals, which does get me to question who told mainman Tyrone Kostitch that his clean vocals should permeate so much of the record. I figure that a lot of it relies on the uncanny feeling that some of the best experimental black metal, like the obvious Ved Buens Ende influence, would employ, yet something seems fundamentally broken in Arkheth's attempt this time around. The vocals are not the only thing that work against the record, but whenever I feel myself not enjoying the record as much as I should, it's them I can easily pinpoint to.

Which is pretty damning for an album that had much to live up to, and there's plenty in Clarity Came With A Cool Summer's Breeze that comes directly from the bizzaro experience of 12 Winter Moons Comes The Witches Brew to clearly imply the same authorship. When things gel together, Clarity Came With A Cool Summer's Breeze is intense and kaleidoscopic, full of elements whose disjointed nature makes more sense the more you give in, and a lot of the instrumental performances are worthy of a lot of praise. But there's too much here that that is challenging in all the wrong ways. Somehow, this feels cheaper than 12 Winter Moons. The production is worse. The artwork is worse. It feels weird when the biggest praise I can give it is for it being short. And that, despite its shortcomings, there's little that sounds quite like it.

One can only hope that this is but a misstep, since there's still clearly so much potential in Arkheth once some of its odd idiosyncrasies and shortcomings could be mended come to forge a more fleshed out sound that avoids its current pitfalls.

Written on 05.10.2022 by
RaduP
Doesn't matter that much to me if you agree with me, as long as you checked the album out.
More reviews by RaduP ››