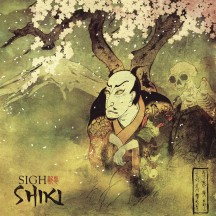 
A surprising number of fans have compared Shiki to Imaginary Sonicscape. That is incorrect. The only valid reference to that album is the one endorsed by Mirai Kawashima himself, whereby we remind him that IS is still his best album and he should keep working. But I wonder what those fans are really after – Shiki is, like all Sigh albums, a masterpiece completely on its own terms.

Shiki is the beginning of a new S-I-G-H cycle of album titles, which on its own is quaintly poetic given the potential readings of its name (including the album’s themes cited by Mirai, “the four seasons” and “time to die”), but this album is also the first in Sigh’s discography to feature a major shakeup in personnel. Filling in for drummer Junichi Harashima is journeyman virtuoso Mike Heller (Fear Factory, Azure Emote, etc.), whose difference in playing style is immediately noticeable and permeates the entire album. Heller was given free reign to play whatever he wanted (in the sense of both instrumental parts and instruments themselves), so there’s a lot of wide-ranging percussion throughout the album. Items used include, in Heller’s own words, “different chairs and blocks and boxes and a t-shirt and a music stand and a 2x4 and all sorts of ridiculous stuff that I miked up and smacked the crap out of to create some unique sounds that Lasse Lammert had to make sound awesome.” And he did. Shiki is easily one of Sigh’s best-produced albums, and with the massive upswing in technicality afforded by the virtuosic session players, this album freely bleeds force, feeling, and fire that make Shiki unique in Sigh’s discography. Sometimes I find the sheer hyperactivity too meticulously technical and noticeable for its own good, such as at the end of “Shikabane,” but in most places, the abundance of fills, hand percussion, and thoughtfully textured rhythms adds a great deal of unprecedented dimension, such as on “Satsui – Geshi No Ato” and “Furu Ga Kuru.”

But while Harashima and bassist Satoshi Fujinami remain Sigh associates, preempted for this release due to pandemic-related difficulties in remote recording, guitarist You Oshima is more seriously absent; after having replaced Shinichi Ishikawa following his estrangement from the group, it seems that Oshima himself lost touch or lost interest as well, which is a shame as his guitar-playing was one of my favorite things about Graveward and Heir To Despair. In place of his explosive soloing and the sour, groaning tone of Ishikawa is the other significant new addition to Sigh’s ensemble: guitarist/bassist Frédéric Leclercq (Kreator, DragonForce, etc.). Leclercq brings his own distinct personality to bear in his guitar work, employing a melodic power-thrash lead style and a heavy riffing approach that complements Heller’s extremely detailed drumming; you’ll hear some classic Sabbath-style licks mixed in with surging dramatic leads, contrasts between menacing builds and ostentatious exercises, and big pace changes from decrepit doom to thrashy black metal.

As if driven by the new personnel, Mirai’s vocals are also clearer and more expressive than on any other Sigh album. I’ve always been a big fan of his vocals, because they exist in a strange interstitial realm between clean and harsh. They’re grating and distorted, delivered with a pained and near-feral fright that communicates with a lot of feeling; they aren’t merely percussive accents, but then they don’t exactly carry a melody either. They fit Sigh’s image of bizarre, pulpy spookiness to a T.

What makes Shiki most unusual is that for perhaps the first time there are strong musical personalities working alongside Mirai and supplementing his vision with their own, rather than operating within his framework. “Mayonaka No Kaii” was a great choice of single because it exemplifies all of the things that are special about Shiki: a continuation of the Japanese lyrical and musical themes of the last album; classic occult rock/psychedelic prog synths; the new, freer drumming style; the increased focus on Mirai’s vocals; a fast break with melodic guitar soloing; the trippy retro-horror atmosphere; it’s all there, and it functions perfectly in the context of the album as an energetic climax that transitions into the toxic folk drone closer, “Touji No Asa.” My favorite Sigh-isms are still intact elsewhere. “Shikabane” has what you’ll also hear in “Voices” or the “Heresy” trilogy, one of those ponderous, electro-horror tension builds with processed vocals and weird key effects. “Fuyu Ga Kuru” has one of those spacey trip-jazz breaks where everybody just kind of chills out in the Lynchian infinite. But the heaviness throughout this album is so much fuller and more rounded than on any previous Sigh album that the contrast is even more noticeable and powerful.

Shiki certainly represents a change of seasons for Sigh, even in the context of the band’s usual eclectic proclivities; naturally my mind is already fixating on what kind of lineup we’ll find on the next album and how the improvements in sound manifested here will survive. But even if the concepts described by the term shiki invoke a certain transience, for right now I’m content to contemplate this album by itself, in my own time. Though it might be a bit early to call time, I do believe I’ve found my album of the year.