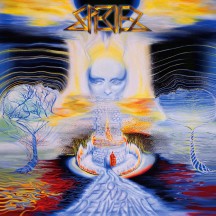 
Melodic thrash metal - to some, that might sound like an oxymoron. How can a musical genre all about aggression and speed leave any room for beautiful tunes? But the more open-minded listeners will remember that thrash has always played with experimentation and thinking outside the box. After all, Megadeth's debut began with piano-playing. And who can forget Metallica's emotional "Fade To Black"? Now, with Species, it's far more than a single intro track or ballad. Sounds interesting? Well, it's time you give To Find Deliverance a listen.

Species, a trio hailing from Poland, provide a highly addictive and immensely satisfying concoction of melodic, technical, and progressive thrash with their debut release. While the album indeed kicks off with an unconventional, moody synth track, the experimentation doesn't stop there.

Just from the song "Parasite", you can get a good idea of the style of Species. Starting with a jazzy guitar lick, the track continues with energetic lyrics of "thousands of leeches consuming and taking control - of you!" Standard, catchy thrash. But, four and a half minutes in, Species shows a different element: a calm, entrancing atmosphere that recalls melancholic moments in some of Opeth's ballads. Along with exquisite guitar solos reminiscent of Testament, and Coroner-like technical, sharp riffs, Species seamlessly transition to instances of progressive music throughout the album - like with their song "Deus", which demonstrates a mournful mood accentuated by acoustic guitars, bongos, and maracas.

The most immediate association I had when listening to To Find Deliverance was with Hazzerd's debut album. Both displayed very technical, fun, and energetic thrash that flows extremely well from track to track. For instance, on Species's album, the instrumental song "Malfunction" indulges for the majority of its five minutes in an ecstasy of complex musicianship, followed by sweet melodies that lull the listener into an almost psychedelic trance. And just before one can drift off, "Thy Name Is Slaughter" swoops in with a foreboding riff, grabbing the listener's ear and slowly raising the tension once again, perfectly transitioning to the most menacing thrash on the album.

Throughout the album, many melodies and riffs make reappearances with slight variations. For example, an oriental-sounding riff from "Falls The Tower" appears as a bass intro of "The Monument Of Envy". This was an intriguing songwriting choice, in my opinion, since it contributes to a sense of cohesion and unity across the songs. It also gives the listener a feeling of pleasant familiarity when recognizing the recurring themes.

My only complaint with the album presents itself in the final track, "Ex Machina". Usually, I'm quite fond of long, epic conclusions of albums that provide a comprehensive summary of all of the preceding songs' strengths. However, in the context of this album, I believe this track should have been drastically shortened. 11 minutes proves to be far too long as the song loses much of the momentum that the album had meticulously crafted. To be clear, "Ex Machina" shouldn't be scrapped entirely - there is undoubtedly great musicianship here, and the last few minutes provide a true heaven of ambience (with the introduction of yet another instrument: the tambourine). But the more traditional thrash verses at the beginning of the song drag on for far too long and don't demonstrate anything new that hasn't already been shown on the previous songs.

Nevertheless, overall, there's hardly anything to complain about on To Find Deliverance. The performance is sublime, the production gives every instrument a moment to shine, and even the cover art's colorful mix of ice and fire is simply captivating. Species show off how to expertly balance traditional thrash energy and technical virtuosity with tranquil, mesmerizing prog.

I haven't found deliverance yet, but I believe I've found 2022's thrash AOTY.

Written on 20.10.2022 by
F3ynman2000
Lift me above the clouds; crush me into dust. Voyage across the stars; journey into hellish depths. Fantasies and nightmares - all is possible in the realm of music.
More reviews by F3ynman2000 ››