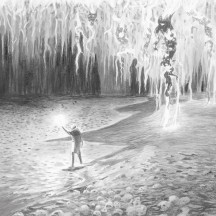 
For months, one of 2022's best doom albums has been travelling under the radar like a stealth submarine.

Released by Svart Records, the same label that brought you other blooming doom acts like Green Lung and Messa, Famyne's II: The Ground Below might seem at first like an average record in a sea of new releases. Granted, Famyne's music is not as devastating as something like Kypck, and not as elegant as the epics of My Dying Bride. If you want innovation in the doom genre, this won't be the album for you. But, if you're in search of some music that mixes different classic influences into 44 minutes of glorious metal fun, then you've come to the right place - because Famyne sure as hell deliver!

Instead of settling for one approach, II: The Ground Below displays a multitude of styles across its eight tracks. There are moments of melancholy on the song "Gone", relaxing stoner haziness in "Babylon", hard rock grooviness on "The Ai", and straight-up headbang-able riffs with "Defeated". Overall, there's a traditional, catchy doom vibe akin to Pentagram, but slowed down at times by instances of psychedelic atmospheres and the gloomy vocals.

That brings us to the main star of the band: vocalist Tom Vane. With his somber wails and theatrical cries, Vane truly sells the album. Over the course of the tracklist, he exemplifies a marvellous range of emotions. On the song "Submarine" alone, there's a stark contrast of triumphant cries ("a submarine!") and the remorseful outro as he bids the listener to "grieve in silence". His operatic performance of agonized lamentations reminds me of the vocalists of Candlemass.

Vane's performance presents a feature that I find lies at the heart of excellent doom metal: a feeling of uneasiness. From the menacing devil of Black Sabbath's debut song to the Lovecraftian nightmares of Lucifer's Fall, doom metal has continuously been characterized by hints of horror. With Famyne, there's a certain fanatical edge to Vane's voice that reminds me of Ozzy Osbourne's weird yet captivating wails. Watching Vane stare with crazed eyes inside a cave in one of their music videos or listening to the screeching (almost Slayer-like) guitar solos at the end of "Babylon" simply adds to this air of unsettling oddity.

But these notions of unease are only secondary. For the most part, this album relishes in either groovy stoner riffs that transport the listener to a comfortable soundscape of fuzz or dark tunes that create a sullen and grim atmosphere. The guitarists focus primarily on crafting crunchy rhythms, leaving Vane to take center-stage. Satisfying exceptions present themselves on tracks like "Once More" and "For My Sins", which include some truly impressive, face-melting guitar solos. But, really, you can pick any of the eight songs here and you'll have a fun time of head-bobbing, foot-tapping rock 'n' roll.

In conclusion, II: The Ground Below makes for an extremely entertaining experience of delightful melodies and mournful ambience - all accentuated by one powerful, dramatic voice.

Written on 25.10.2022 by
F3ynman2000
Lift me above the clouds; crush me into dust. Voyage across the stars; journey into hellish depths. Fantasies and nightmares - all is possible in the realm of music.
More reviews by F3ynman2000 ››