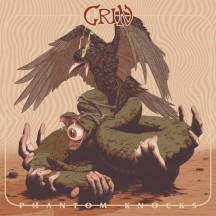 
It has thus been decided that the bass is the instrument of the desert.

Back when I reviewed Grin's previous record, 2020's Translucent Blades, a lot of what impressed me was that it both came very early in the year when everybody is hungry for new year releases, and also because of how it showed a duo of people making sludge. That duo is also part of Earth Ship, which does sound a bit like an extended Grin, but within Grin, Translucent Blades already showed a more expansive sound than their debut, though one where the bass still prevailed. You can see Phantom Knocks as an even further evolution.

First it's the instrumental palette. Two people playing sludge. One drums, one bass. That was always the big Grin appeal. But these two records also had occasional guitar moments courtesy of drummer/vocalist Jan Oberg. I'm not sure how that works out live. But the guitars provide support for Sabine Oberg's bass rather than the other way around, in a way that feels very organic. The melodies from the guitars feel like they float around the lumbering low buzz rather than on top of it, creating sort of a soundscape feeling. Adding to that is also the Hammond organ on one of the tracks, performed by The Ocean's Rene Nocon.

Then it's the dynamic songwriting. Obviously, it being sludge, it relies on some sort of crushing doomy heaviness, which the bass certainly provides. The vocals do have quite the harsh tone most of the time, something very fitting for the genre. But the psychedelic elements that make the sound feel jammy and airy, complete with reverb-full vocals, create a sound of atmospheric sludge that doesn't entirely deviate from post-metal, especially with how soundscape focused the album is. The drum performance especially feels pretty vivid in those atmospheric moments, maybe even more so than in the crushing ones.

Written on 26.10.2022 by
RaduP
Doesn't matter that much to me if you agree with me, as long as you checked the album out.
More reviews by RaduP ››