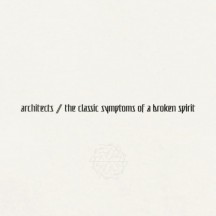 
An apt title for sure.

Maturity appears to be a menace for the members of Architects; the band sounds like it is straining at the leash within the confines of the metalcore genre, torn between where they want to go artistically and where fans want them to go musically. Following the poor reception to For Those That Wish To Exist, the band reverts to form, more so out of obligation than inspiration if The Classic Symptoms Of A Broken Spirit is anything to go by.

Despite their peers in While She Sleeps and Bring Me The Horizon being able to transition to new sounds successfully, Architects sound like they're stuck in a rut, and that bleeds out into their music; they try to appease themselves and their fan base, but I doubt either will be particularly pleased with the compromise, as the resulting album is, at best, a passable metalcore album, but easily the worst in the band's discography.

Architects sound lifeless for much of this record, sleepwalking through it performance-wise for much of the album's run time. "Burn Down My House" and "Spit The Bone" sound like the band put the minimum amount of effort in, serving to expose the average songwriting quality of both tracks in the process. While much of the album is serviceable, with tracks like "Doomscrolling" and "A New Moral Low Ground", it is such a drop in expected quality from a band who have previously helped raise the bar on prior albums.

While The Classic Symptoms Of A Broken Spirit is well-produced, it serves only to highlight the quality of the performances, none of which can be called inspired. Carter's vocals are pedestrian at best (the "bleh" on "Spit The Bone" could hardly sound more bored if he tried) while the lyrics are laughably poor; "I fell asleep in the backseat, fuck, it was so sweet, I ran a red like I saw a matador". Searle's drumming lacks any flourishes that could add character to a track, while Middleton and Christianson sound like they have no ideas up their capable sleeves.

The Classic Symptoms Of A Broken Spirit does have bright moments, with three tracks where you can hear the enthusiasm in their playing. The opening tag team of "Deep Fake" and "Tear Gas" alongside the closing "Be Very Afraid" will give listeners mixed feelings, with the opening duo raising expectations that won't be matched for the rest of the record, while the closing track will make you wonder why the rest of the album couldn't be in a similar vein.

The Classic Symptoms Of A Broken Spirit is perhaps the best name Architects could have given this album, as it sounds like a textbook example of a band going through the motions as they leave their talent and ambition at the door. While it isn't a disaster of an album, it will fit squarely in the niche where it will fade into obscurity; not bad enough so as to be memorable and far from good enough to warrant remembering.

Written on 30.10.2022 by
omne metallum
Just because I don't care doesn't mean I'm not listening.
More reviews by omne metallum ››