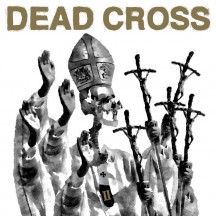 
Madder than a badger in a forklift truck.

Combining the forces of two of the most prolific personalities on the heavier side of music in Mike Patton and Dave Lombardo, Dead Cross have long been an interesting prospect. While 2017's self-titled debut may not have set the world afire (well, the world is basically aflame, but the band are not to blame I'd argue), it was an entertaining project and, given the busy schedules of the aforementioned members, one I did not expect to see repeated. Lo and behold, one of the pleasant surprises of 2022 was the news of a sophomore release by the band, helpfully titled II for those who had missed out on the band the first time round.

With Patton late to the party on the band's debut, he didn't contribute creatively to that record. This isn't the case for II, which has the man's fingerprints all over proceedings and damn, if it isn't all the better for it. II feels like spiritual successor to latter-day Black Flag, except, well, being good. Hardcore ethos mixed with an avant-garde approach makes for a compelling listen for sure.

From the opening "Love Without Love", the album crosses wires and connects dissonant ideas while the listener sits back and watches sparks fly. II is all over the map, with the breakneck speed of "Heart Reformer" veering into melodic passages like a train derailing but somehow landing onto another pair of tracks; it shouldn't work but somehow it does. There are moments when Dead Cross do surprise you by following convention, with the straight-up hardcore of "Christian Missile Crisis" and "Reign Of Error" being powerful direct punches to the senses.

Lombardo is the perfect foil for the madness unleashed here, being able to balance the power of hardcore with the less conventional rhythms and patterns of songs like "Nightclub Canary". While Cain and Pearson may not have the profile of their bandmates, they do manage to grab the spotlight away from them and force you to pay attention to them, thanks to performances such as on "Ants And Dragons".

Like all experimental music, II is likely to divide listeners owing to its eclectic nature. I can imagine to some audiences, the thirty-two minute runtime may sound like a bunch of over-caffeinated musicians on psychedelics making noise, while in a similar vein, those who are into more experimental music may find the hardcore leanings to be too limiting to proceedings. What I can advise both groups to do is to at least give II a try.

Dead Cross may be regarded as merely another non-Faith No More project for Mike Patton and a dime-a-dozen performance for Dave Lombardo, but damn if II doesn't show that both musicians need not stick solely with ther day jobs. Hopefully we get more from this band in the not too distant future.