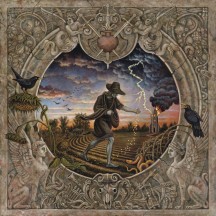 
How can an album longer than its predecessor nevertheless feel more immediate?

The answer is that the predecessor, Hierophant Violent, which was also Forlesen's debut, was sloooow (and good). It was the kind of atmospheric doom that blended drone and black metal but felt more at ease with long ambient sections. And that sticks mostly true with Black Terrain. In all respects, this is a bit of a change for Forlesen. The band, comprised of members past or present of bands like Lotus Thief, Botanist, and Kayo Dot, relocated, and also switched labels to I, Voidhanger records, so it's a bit of a different ground that the new album starts on.

Compared to Hierophant Violent two tracks and forty minutes, Black Terrain's four tracks nearly hit the hour mark. Already having an opening track that nearly hits 20 minutes should be an indicator as to this album's preferred pace and its focus between melody and atmosphere. For the most part, Black Terrain is a plodding beast, sometimes not even in a metal way. While its doom metal is stretched and turned into ambient slowness, dark ambient and slowcore and post-rock have a sizeable part of the band's sound, even having entire tracks, like the title track, dedicated entirely to ambiance. The album still starts with ambiance, and quite enough of it, but there's something that shifted this time around.

Black Terrain is a bit rougher in translating its cinematic soundscapes, with the distorted guitars and pounding drums taking the lead more often than they used to, combining Sólstafir-esque atmospheric rock with a slower gothic doom akin to Novembre. "Harrowed Earth" erupts into blasting black metal more intense than ever for the band, and closer "Saturnine", also a nearly 20-minutes behemoth, ends with some powerful progressive doom. There is plenty on Black Terrain that wants to grab the listener rather than letting him sit in silence, but the long-form songwriting, even the slightly more immediate one from here, still focuses on created said soundscape.

All the distorted guitars and the black metal explosions don't fundamentally change Forlesen's plodding atmospheric nature. It's a contemplative, cinematic, immersive experience. The dual hypnotic vocals, the rumbling distortion, the long-form songwriting, all twist very slowly to create it. And while the album does feel longer than it is, it's buildups do pay off, while also changing things just enough not to rehash the sounds of its successful predecessor.