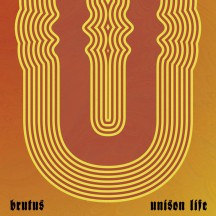 
There are portions in your life where you're so tired of everything, and you're so grateful for musicians who make it so easy for you to feel the emotional impact of their music.

Brutus (BEL) (who we have to keep around with that annoying "(BEL)" because "Brutus" is already taken by an actual metal band we had featured already, plus there's also a Norwegian psych hard rock band of the same name that we're probably gonna add at some point) is the kind of band that I couldn't help but regularly come back to after reviewing their previous album, 2019's Nest, for our non-metal feature. I don't always have the time or drive to come back to stuff I reviewed, and even if I do, it's even rarer that I do it regularly. Even rarer is the case where I'm so looking forward to a new release that I listen to the promo singles regularly instead of just waiting for the entire album to drop. Well, here comes Brutus (BEL) being that exception.

Normally I'd bring genres up around this part of the review, but Brutus (BEL)'s post-everything sound is a bit hard to categorize with existing genre tags. Not really punk, hardcore, metal, or rock, not really Wolfecore, with not enough of any of those to confidently call the band a "[insert genre]" band. We chose post-hardcore and went with it because that's still the most accurate. It's definitely post-something in its instrumental melodies, though the songs still have pretty conventional song structures and reasonable lengths. It's intense musically, and especially emotionally, in a way that feels closest to emotional hardcore. Close, but not really.

The elephant in the room is how much the band relies on Stefanie Mannaerts' vocals for its emotional appeal. Her coarse PJ Harvey meets Serena Cherry vocals along with the very direct and vivid lyricism is very unsubtle in how expressive it is. And subtleness is cool and all, but the very direct emotional impact of a voice that feels like it's struggling to even whisper a sound and yet it screams feels immense. The "post" aspect of the music is also pretty direct, with the wall of sound of Stijn Vanhoegaerden's guitar and Peter Mulders' bass providing the backing punch for the pained vocal delivery. Worth noting that the most punkish aspect of the sound remains in the drums, coincidentally also performed by Stefanie.

However more than just being direct and emotional, Brutus (BEL) are apt at creating music that is also interesting and catchy. I had no problem feeling familiarity with the songs, especially the promo singles, after just one listen. The music, though not overly complicated, ebbs and flows though various soundscapes, some punkier, some more triumphantly reverb-filled, some mellower, all musically hefty beyond mere great chorus backed by punchy music. With a succinct enough runtime, Unison Life feels like a bloodletting of all the tiredness and trauma, all in a neat package.