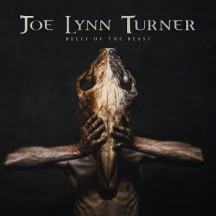 
In an unlikely turn of events, Peter Tägtgren produced a metal album for an overlooked classic hard rock singer.

Joe Lynn Turner is a name that most of us probably stumbled upon quite a lot of times, having been a vocalist for bands like Deep Purple, Rainbow, and Yngwie Malmsteen. However, you probably won't have a lot of people who would consider Turner their favorite vocalist that those projects ever had, especially considering how he only did one album with two of the aforementioned, with his Rainbow albums being his best received of the bunch. I haven't exactly followed what Turner has been up to outside of these bands, so I haven't really checked that project he did with Glenn Hughes, nor Sunstorm, and I've only skimmed through his solo Joe Lynn Turner stuff to unsurprisingly find 80s-ish AOR/Hard Rock that just barely sometimes borders on heavy metal.

So, you can guess why Belly Of The Beast comes as a bit of a surprise. It is, to my limited knowledge, the only Turner album I could unquestionably call metal. Even if it does have its hard rock moments, it has little of the cheesy sap of 80s AOR. More that hard rock, this leans towards power metal, with Turner's vocals still feeling very powerful in his 70s, and the orchestral flair of the music certainly helping that power metal vibe coming along. However Tägtgren's production comes along more than just in the symphonic flairs and the heavy distortion in the guitars, with the industrial-ish processed drums not entirely a sound that merges well with the rest of the sound.

Some Rainbow seeps into "Black Sun", instantly making that one a highlight. As weird as it is for the hard rock-ish moment to feel like a highlight in an album that I lauded and set apart for its heaviness, Belly Of The Beast is the kind of album I appreciate more in concept. I'm not sure how much thought I'd give this album if I didn't already know who Joe Lynn Turner was, and as great of a vocalist as he still is, I don't really find much that is especially distinctive about him as a vocalist. Couple that with the weird production choices, and the cringeworthy conspiratorial lyrics, creates a bit of a frustrating listen.

That said, taking a hard rock singer and making him do a metal album is still such a cool concept. What's next? Bon Jovi and Alex Staropoli? Steven Tyler and Matt Heafy? David Coverdale and Nergal? The possibilities are endless.