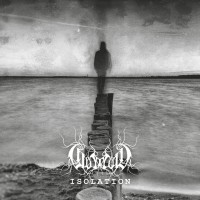 
ColdWorld is a solo black metal project brought to you by Georg Börner, and here is this project's third release Isolation - appropriately titled I say. due to it being released on the fringes of the Covid-19 pandemic. On previous records, Börner provided us with grim and eerie atmospheres, and cold wintery soundscapes that sent shivers down the listener's spine, so this brings the question, does Isolation deliver the same output?

Well, the atmosphere certainly delivers; the cold wintry soundscapes are evidently clear right from the off on Isolation, perhaps even more so I say. I guess it's only fitting for him to carry on this trend, but is it enough this time to captivate the audience and provide something special? Perhaps so, but upon listening you will notice several things that stand out differently; for a start Isolation is much more firmly rooted in the depressive side of black metal than its predecessors. It's not like Melancholie² wasn't depressive enough to begin with, mind you, but here there's a certain dark and dreary tone that is set throughout the album, which effectively gives off an empty and emotionless ambience, making the listener feel as if they're isolated and often lost from everything that surrounds them (similar, I suppose you could say, to what Paysage d'Hiver achieve). This depressive ambience is helped by the tearful violin sweeps accompanied by the traditional hypnotic tremolo riffing, in which the melodies simply flow slowly in a way that's nothing out of the ordinary but put to effective use.

The album effectively is an instrumental journey, as the vocals tend to be very scarce; for instance, the "Soundtrack To Isolation" has no vocals to be heard at all, and only a few shrieks are present on tracks such as "Waltz" and "We Are Doomed". There is also a post-rock element in the way in which this album is delivered, with the soft calming instrumentation that is opposed to the aggressive harshness, and the tempo and flow remains consistent and hypnotic across the atmospheric build-ups. The album's final track, "Hymnus", is generally more fiery than the rest, and acts as the ideal send-off, with the track's theme being set around resilience and hope in the times of despair during the midst of the global pandemic, as you finally begin to see the light at the end of the tunnel.

The production is as you might expect, nothing breathtaking, but the rawness and stripped-back sound gives the album its authenticity, so you can feel the emotion behind the music all the more, just as it was with their previous efforts.

To sum it up, Isolation may well leave a lasting impression due to the nature of the album's theme. Isolation may not be as groundbreaking as the debut Melancholie², but along with Autumn it remains a solid release in its own right, with its own unique atmospheric setting. Although the worst days of the Covid-19 pandemic are now behind us, Isolation will always be a fitting reminder of the hellish days we all had to endure, some of whom still have to live with those long-lasting effects.