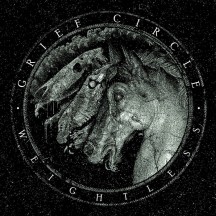 
For an album that combines some of the denser genres within the metal spectrum, Weightless is not the most obvious title for Grief Circle’s debut.

Grief Circle is a new Polish project featuring members and ex-members from a few bands in the scene; a few may be aware of Voidsmoker and Forge Of Clouds, but a few more may be familiar with Moanaa, whose vocalist K-vass fronts up Grief Circle. Last year saw the first album from Moanaa in several years, so it’s perhaps a surprise to encounter more material from that lineage so soon, but maybe other more prolific members of this quasi-supergroup have helped with getting this debut album out within a year of the band’s formation. Still, the fingerprints of Moanaa can be seen quite clearly on Weightless; however, this is not just a straightforward post-metal album, as there’s a few other parts of the record’s equation to be accounted for.

Grief Circle describe themselves as a mixture of post-metal, doom and stoner metal; there’s clearly overlap between the latter two genres in particular, so perhaps it’s not the most shocking combination of influences, but said influences can definitely be heard at times across Weightless. There’s a mellow atmospheric stoner vibe to passages of “Outward Spiral”, and the more energetic riffs midway through “Hangman” have a touch of desert rock to them. On the flip side, post-metal/doom fusions take my mind to a band like Ortega, and I can hear hints of their style in the trudging title track, while the chugging outro to “Outward Spiral” also gives me flashbacks to recent records by fellow post-doomsters Process Of Guilt.

At the same time, the overriding vibe is that of a post-metal album, and one that’s not too far from Moanaa; I’m not making that comparison just because of the vocal overlap, but the lighter sections in general (such as on “Hollow”) take my mind back to Embers. The main perk Weightless has over that record is its heaviness; this is an ominous, hefty album, with an oppressive density to the louder moments and a sinister bleakness to a lot of the softer passages. That slow, trudging heaviness works particularly well on a song such as “Outward Spiral”, which bleeds in some subtle atmospheric tones into the chords used during these crunching passages.

Overall, without relying too much on comparisons to K-vass’ other band, I feel Grief Circle offers the darkness and intensity that I found to be lacking from Embers, and overall this is a very respectable outing for the new group. Not all of the songs flow as naturally from segment to segment as they could, and in general it doesn’t have quite the impact that the strongest albums in post-metal this year have managed, but I’m intrigued to hear more from Grief Circle going forward.

Written on 07.11.2022 by
musclassia
Hey chief let's talk why not
More reviews by musclassia ››