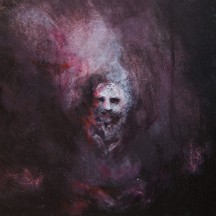 
When a band triumphantly returns more than a decade after their obscure yet excellent debut, the last thing they deserve is to be shunned.

For a project that saw the unholy light in the last days of the 90’s, this German duo has a most humble repertoire. Two promotional demos filled the gap between Kathaaria’s inception and their debut, The Complex Void Of Negativity, from 2008. Whatever happened in that decade is close to a mystery, which is very fitting given the debut’s sound in general. The intriguing and unfocused black and white artwork matched both the esoteric nature of the album and song titles. But what was truly perplexing was the sophisticated black metal within. From dark and moody to bouncy and catchy. It covered many grounds, as dissonant melodies clashed with potent and meaty death/black metal riffs. All this with close to no tricks under their sleeve: no synths, no keyboards nor vocal effects. Forward-thinking yet traditional.

Kathaaria completely disregard the effects of time. They bounce back from obscurity and unleash a slow, heavy wall of riffs that quickly turns into a riveting mass of black metal grandeur. The dissonant, yet oddly catchy, nature of the riffs reminds me of the highly influential Ved Buens Ende, although the ravenous riffs are far more rooted in a brutal sense of urgency than the jazzy structures of the mighty Norwegians. Kathaaria’s other core elements, the vocals and the drumming, are considerably more traditional but no less powerful. The raspy yet easily understandable howls are what you may find in most modern death/black metal acts, but they are an excellent match for the threatening aura of the music. The drumming is muscular and varied enough to properly swing back and forth between the slow burners and fast roller coasters of tracks throughout the album.

But seriously, the main selling points here are the outstanding riffs and solos. Kathaaria still carries a complex sound that is hard to dissect. The riffs are ever changing, exploding into glowing crescendos as the leads unleash dark, twisted solos. These lead guitars first seem very dissonant, but then turn unexpectedly melodic and with a vibrant touch reminiscent of the great Unanimated. The jaw-dropping solos and melodies from “The Judas Principle" and the incredible closer “Apathetic” remind me of Funeral Mist’s own tribute to the heavy metal cult in “Children Of The Urn”, from their latest album Deiform. It’s not difficult to see why both these two projects belong to the same prestigious label, Norma Evangelium Diaboli.

To Be Shunned By All​.​.​.​ As Centres Of Pestilence is clearly one of the highlights of 2022. It has an incredible flow and the combined elements achieve a very fresh sound. If you desire riffs to hum for days and passionate solos that breathe artistic integrity, please do not pass this one up. May this album launch them out of obscurity so we don’t have to wait another decade for their next release.