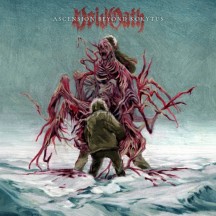 
As far as metal is concerned, death metal seems to be the go-to style when dealing with horror movie fare; however, the oppressive, harrowing atmosphere of the best horror movies cries out for a doomier approach.

Ascension From Kokytus is a concept album inspired by John Carpenter’s legendary The Thing and its literary precursors; funnily enough, it’s not the only metal album released this autumn that retells this classic story of frozen terror (insert ‘two nickels’ meme here). This one is the full-length debut of Costa Rica’s VoidOath; if you’ve heard any of the other Costa Rican bands in the site’s database, you may be familiar with some of the musicians in this group, as there’s members of Age Of The Wolf (the first Costa Rican band I heard) and Crypt Monarch to be found in this quartet. Both those groups fall under the stoner metal umbrella; VoidOath very much do not.

In as succinct a description as possible, VoidOath play sludge death/doom on Ascension From Kokytus; however, in terms of prominence, I would say that death is a clear third place out of those three genres. Doom is the overriding state of being on this album, but frequently it is of a sludgy variety. This becomes clear early on, as the first few minutes of “Orion-Cygnus Descent” are a grim, trudging crawl through a plodding sludge groove, with only the lively drumming of Gabriel Ortiz sustaining its momentum. It’s not all torturously slow though, as there’s an onslaught of blasting midway through (during which Ortiz’s drumming rather dominates the mix; a bit less cymbal here so that the guitars were audible wouldn’t have been a bad thing).

Ortiz is a crucial piece of the VoidOath puzzle; whether’s it’s blasting, swinging, pounding in thrashier/deathier moments or building suspense with some neat double bass/tom-heavy patterns, the drums do a lot of working in shaping the sound of Ascension Of Kokytus. A good example of the latter of those can be heard in the sinister outro to “Orion-Cygnus Descent”, a maelstrom of pounding drums and sinister discordant guitar layers. The guitars also are served well by the production, giving them a fitting tone depending on what each song is aiming for; the trudging sludge of “Festered Sepsis Lacerations” is as dirty and groovy-sounding as you would hope, and the lumbering, droning doom in “Alabaster Ruminations” is similarly well rendered, particularly the cleaner guitars that enter and add texture as the song progresses.

There’s a decent balance across the album of the crawling doom, murky sludge and vulgar death across the album, with the latter really coming to the fore on closing track “From Gods To Morsels”. It’s not the first time these three bordering styles have been brought together, but it’s a fairly convincing combination that VoidOath have pulled off here. Whether the malevolent grimness of this record fully captures the ominous claustrophobia of The Thing, I’m not sure, but in a year that once again has had enough quality extreme doom records to make for fierce competition in a certain annual awards, VoidOath make a respectable case for themselves against the competition with their first full-length outing.

Written on 08.11.2022 by
musclassia
Hey chief let's talk why not
More reviews by musclassia ››